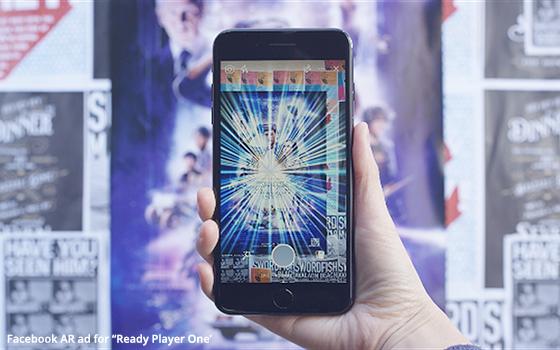 Facebook’s AR Target Tracker is being used on posters for the movies “A Wrinkle in Time” and “Ready Player One.” Pointing a phone camera at the poster makes the characters come to life via augmented reality, according to the Facebook announcement of the new feature.

The AR feature is aimed at brands, publishers, artists and developers to create content tied to images, logos, signs or pictures in a physical environment. The tracker is available through the Facebook camera. The movie posters with AR are worldwide.

“Our goal is to make the technology available for the widest array of devices at the highest level of quality possible, maximizing accessibility to the widest variety of phones so anyone with an iPhone 5S and above or an Android 2012 device and above can use it,” stated Krishnan Ramnath, Facebook research scientist, in a blog post. “We are able to provide this experience for high-end market phones all the way down to older, lower end phones, to ensure that people in any market can experience it. We achieved this by heavily optimizing our tracking algorithm to perform on the low-end devices.”