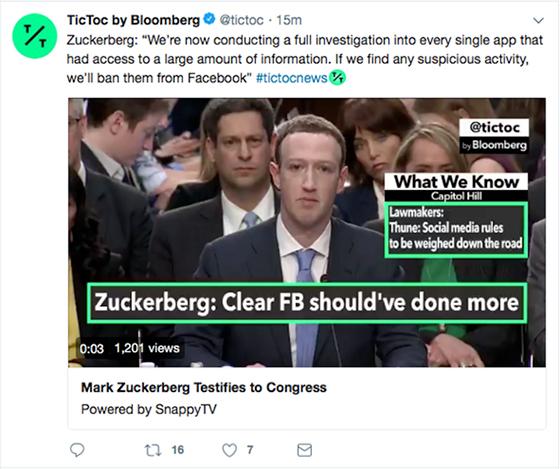 Just last December, Bloomberg launched its live 24-hour news channel TicToc on Twitter. Since then, the network has expanded into international markets, like London and Hong Kong. Now, TicToc plans to expand into direct-to-consumer products, including podcasts, audio digests and a newsletter.

According to Axios, the new products will launch later this month.

Justin Smith, CEO, Bloomberg Media Group, stated in Axios: "TicToc by Bloomberg is an example of how we are leveraging our unrivaled strength in global business journalism to create a modern general news brand that can improve the social-media experience through fact-based news verification and curation.”

TicToc’s podcasts will be available to stream on Apple podcasts, Spotify and Google Play. They include hourly news updates.

An audio news digest will include five to six minutes of audio or video, taken from TicToc’s hourly updates. The digest is intended to “[provide] a snapshot of the news from around the world.”

TicToc’s newsletter will be curated by editors to include a list of top tweets of the day.

TicToc was established by Bloomberg to represent the digital arm of its news network. It features two types of news content, breaking and global news updates. Breaking news is chosen and verified on Twitter by Bloomberg editors.

Since its launch, the network has been busy investing in new ways to reach audiences.

Last month at a SXSW panet, M. Scott Havens, global head of digital for Bloomberg Media, said the channel was interested in covering more live events, counting the State of the Union and Space X launches as some of its successes.

Havens stated: “As we spin up the global infrastructure to do it around the clock and as Twitter's product evolves, we'd like to do five to six live events at the same time in places like China, Europe and South America.”