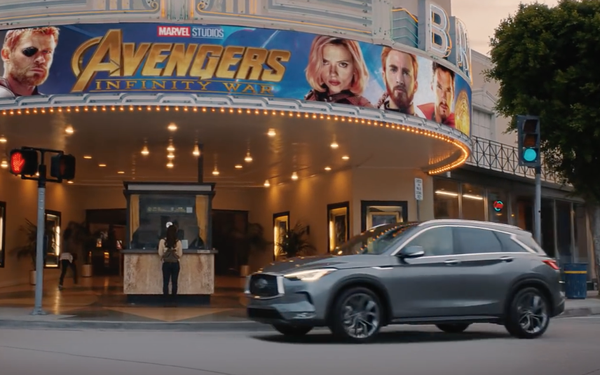 Infiniti is partnering with Marvel Studios’ Avengers: Infinity War for the launch of its all-new luxury midsize crossover, the 2019 QX50.

Between April 18 and May 31, fans will also be able to experience additional Infiniti exclusives, including a behind-the-scenes featurette that explores the origins of the Infinity Stones as well as interviews with cast and crew, content from past films in the Marvel Cinematic Universe and footage from the movie.

There is synchronicity between the launch of the movie and the new Infiniti, says Mindy Hamilton, Marvel’s senior vice president of global partnerships and marketing.

“We recognized a tremendous opportunity to share our mutual passions for risk-taking, adventure, excellence, and advancement with fans all around the country,” Hamilton says in a release.

The movie is the product of more than a decade of storytelling and the Infiniti QX50’s engine is the result of a 20-plus year endeavor. The movie complements the QX50’s various features, said Phil O'Connor, director, marketing communications and media, Infiniti USA.

“The 2019 QX50 is the most advanced Infiniti to date,” O’Connor says in a release. “It embodies everything our brand stands for: Beautiful design, advanced technology and empowering performance.”

The premise for the spot is with the introduction of the Infiniti QX50, Marvel Super Heroes are not the only ones with superpowers anymore. “Date Night” highlights several of the QX50’s “superpowers” including the VC-Turbo engine, ProPILOT Assist, and the advanced craftsmanship of the interior cabin.