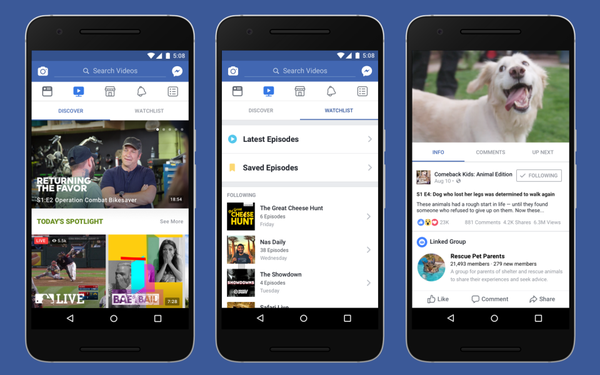 Facebook is preparing to expand pre-roll video ads outside of its Watch video platform, the company says.

“We have seen promising signs, so we are expanding testing to places where people seek out videos, like in search results or on a Page timeline,” write Nick Grudin, VP of media partnerships, and Maria Angelidou-Smith, product management director, in a blog post. “For example, if a person searches for a show, a pre-roll may play when they select the episode to watch.”

The company also announced other changes to its video monetization policies.

Facebook will launch “preview trailers” that allow publishers or creators to promote their videos in a short retailer format in the news feed. The company is also launching an automatic ad break insertion tool, designed to optimize where mid-roll ads are placed.

In addition, the company is taking on YouTube in the brand safety front by launching a “pre-publish brand safety check,” allowing video creators to submit their work before publishing to ensure brand safety. By being preapproved, the videos will be eligible for monetization immediately when going live on the platform.

While the company announced these enhanced monetization policies, they also announced a crackdown on “content that creates less value for people.”

That content includes using manufactured sharing to falsely inflate viewership numbers on videos, and using still images in a video format to try and get video CPMs.

Similarly, pages that primarily take content from other sources and republish them with limited or no editorializing will be facing extra scrutiny.

“While we will not be taking immediate enforcement action on this issue, we want to signal to content producers that this is a programming style we will more deeply evaluate over the coming weeks and months to assess what level of distribution and monetization matches the value created for people,” Grudin and Angelidou-Smith write.