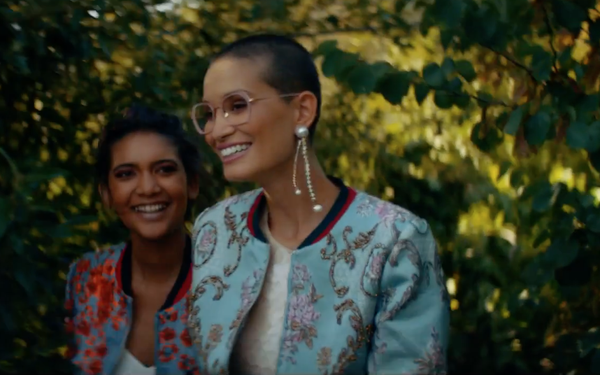 Transitions Lenses aims to update its image with a campaign that focuses on style.

Millennials and Generation Z likely have only a vague awareness of the brand coupled with a memory of their mom or dad wearing the coloring changing lenses in the ’80s and ’90s, according to the company, which is undergoing a complete brand refresh. The aim is to attract a younger generation of style-centric wearers to the photochromic lens category by positioning the brand as way to personalize lenses and express one’s self.

The new campaign, from France-based Animals, intros a new tagline, “Light Under Control,” via a 60-second TV spot. The effort features a refreshed Transitions.com and social, including a Snapchat campaign.

The TV spot shows fashionable Millennials sporting glasses that effortlessly alternate between clear and darkened, depending on the amount of light they encounter.

“In the age of the selfie, we know style and self-image are important to young eyeglass wearers,” says Chrystel Barranger, president of Essilor Photochromics and Transitions Optical. “Glasses are part of their personal identity. The Light Under Control campaign encourages consumers to personalize their glasses, including the lenses, to reflect their lifestyle.”

The brand’s campaign last year also focused on Millennials with a campaign from Havas Lynx with the tagline "Live the Good Light.”

“Millennials continue to be an important target for Transitions Optical,” Barranger tells Marketing Daily. “Our campaign this year is focused on recruiting new wearers and attracting a younger generation of eyeglass wearers to the photochromic eyeglass lens category.”

Last year’s Millennial-focused campaign aimed to educate consumers about the benefits of Transitions lenses and how they filter the harmful light so they can enjoy life and the good light around them.

“It was the first time we spoke directly to consumers on TV about Harmful Blue Light, and it proved successful — 45% of those who were exposed to our campaign are now aware that Transitions lenses help protect against [blue light],”  Barranger says. “After being given a simple statement on blue light to educate them, nearly 80% of consumers said they were likely to purchase a product that would provide protection. And that was even higher for Millennials (85%).”

This year’s campaign will continue reaching younger, fashionable and tech-savvy consumers by leaning in on the style factor of Transitions Light Intelligent Lenses, positioning the brand as modern, stylish and relevant, she says. The initial TV spots will run through 2018.

“We will be leveraging TV and increasing our spending on digital advertising, online video and social media to drive the technology and style messages year round while also generating awareness with younger wearers in the places they consume media most heavily,” Barranger says.

Users can leverage the Snapcode, found on the brand’s Instagram, Twitter or Facebook, on their mobile devices to unlock the experience, which features several frame styles and environments that help demonstrate what the lenses look like indoors clear and outdoors as they darken.