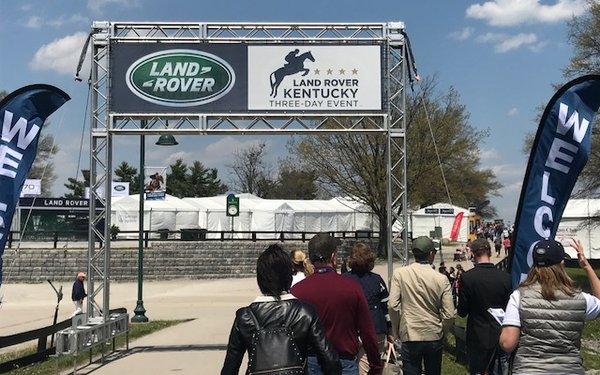 LEXINGTON, Ky. — This past weekend, Land Rover took over the title sponsorship of the Kentucky Three-Day event from Rolex, which had the marquee position for 37 years. The automaker is no stranger to the event. The new role follows eight years as the official vehicle and five years as a presenting sponsor.

“The (event) allows us to strengthen our relationship with a customer demographic that aligns with our core customer target,” Kim McCullough, vice president of marketing, Jaguar Land North America, tells MediaPost.

McCullough was on hand Sunday to present the winner, Great Britain’s Oliver Townend riding Cooley Master Class, with the keys to a loaded Discovery, which he gets to drive for a year. That indisputably tops the Rolex that past winners received.

The jazzed jockey took it for a very fast spin around the perimeter of the stadium where the final competition, jumping, had just taken place. That added excitement may have helped cement with spectators and participants that Land Rover is now in the driver's seat. However, the stadium still says Rolex Stadium, a deal the watchmaker has with state of Kentucky through 2020.

The event has tremendous reach. Over the course of four days, there were tens and thousands of spectators. The dressage tests on Friday attracted almost 12,000 spectators, while more than 33,000 turned out for Saturday’s cross-country event and more than 21,000 were on hand for the jumping on Sunday. The event will be broadcast on NBC this Sunday and the camera shots will feature no shortage of Land Rovers. Dozens of vehicles were strategically placed throughout the cross-country course and in the stadium where the dressage and jumping competitions took place.

Frankly, anyone who attended the event this weekend knew it was all Land Rover, all the time. There was no shortage of activations, including test-drive opportunities with a range of vehicles including Range Rover, Range Rover Sport, all-new Range Rover Velar (a super hot vehicle, it has won several awards recently including WardsAuto Best Interior) and Discovery. The course included water, mud and inclines, which gave the vehicles a chance to show they are as capable as they are attractive.

The automaker debuts its “Start Off-Road” Drive Experience. Designed for teenagers, the activation introduced young drivers ages 14-20, to the exhilaration of off-road driving behind the wheel of either a Land Rover Discover Sport or Range Rover Evoque on a multi-terrain course under the watchful and highly trained eyes of a Land Rover Driving instructor (and their parent in the back seat.) In many cases, this was the first time the young teens had ever driven and contrary to some studies, kids do still love the idea of driving, McCullough says.

A very Junior Drive Experience allowed kids ages 4-8 to drive a mini-electric car, modeled on the original Land Rover Series I vehicle, along a miniature course lined with hay bales.

The automaker also showcased a Discovery Sport in the Ultimate Stable, where they could collect rider autographs, receive a commemorative horseshoe with the Land Rover emblem, and pet and take photographs with Patrick the miniature pony.

Finally, Land Rover sponsored a tailgating competition on Saturday during the cross-country portion of the event which attacked almost three dozen Land Rover owners, who decked out their tailgates with memorabilia, flowers, tablecloths and gourmet spreads. The winners, Rick Perkins and Lauren West of Lexington, decked out their 2016 Range Rover with candles, silver serving trays, flowers and champagne and were dressed very dapper/British to complement the decor. The judging team included equestrian and actress, Kaley Cuoco,

This Kentucky Three-Day Event joins other equestrian events the automaker sponsors worldwide, including the Burghley Horse Trials in England, which Land Rover has been the title sponsor since 2005 after first starting as the event’s official vehicle in the early 1990s. The automaker recently extended its role of official automotive sponsor of the U.S. Equestrian Federation through 2020.

It’s obviously a great fit for the brand, judging by the number of high-end vehicles in the parking lot this weekend. There’s a lot to be said for knowing and embracing your audience, and Land Rover does it with the best.