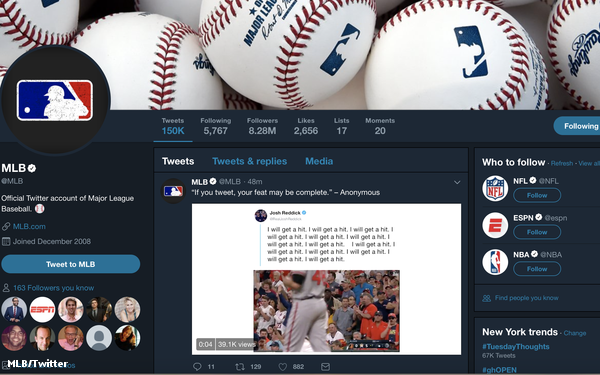 Twitter, seeking to differentiate itself from other technology platforms, emphasized the live nature of its content at the company’s newfront presentation in New York Monday evening.

The company says that video now accounts for more than half of ad revenue, and that video views on the platform have almost doubled over the past year.

At the event, the company laid out its plan to keep that growth flowing.

Twitter has formed content partnerships with media companies, producers, sports leagues and news organizations, seeking to build a content pipeline to appeal to a wide range of users, with “live” serving as the unifying factor.

“For advertisers who want to associate their brand with compelling video content, Twitter offers the distinct ability to tie that video conversation to the biggest live moments and live content in the world, ultimately allowing brands to be a part of the cultural zeitgeist in real time,” said Twitter VP and head of content partnerships Kay Madati at the newfront. "That is our superpower.”

“Video -- and live video in particular -- can make you feel like you are experiencing the world through someone else’s eyes," saidKayvon Beykpour, Twitter’s head of video. "That is why video is such an important focus area for us as we look to help people see and share what is happening.”

While media companies have been approaching companies like Facebook with skepticism, they seem much warmer to Twitter, creating programming designed to complement the shows they air elsewhere.

Likewise, The Walt Disney Company announced that ESPN will expand its “SportsCenter” franchise to Twitter through “SportsCenter Live,” which will use breaking news as a hook to deliver live coverage through Twitter moments and video. ESPN will also stream the company’s “Fantasy Focus” podcast live and will incorporate questions from Twitter into the show. Disney will also announce new content for Twitter from its other brands at a later date.

Major League Baseball will complement the slate of live games it will air on Twitter throughout the season with a new show to run interspersed with the All Star Game and postseason, while Major League Soccer will stream its MLS Homegrown Game (which highlights emerging talent) on the platform.

“Our ambition is to have every event that happens in the world, also happen on Twitter. And if it is relevant to you, it will be easy to find, easy to follow along, and easy to discuss,” said Beykpour.

The company also wants to get marketers to embrace its live video vision, and is launching a “Live Brand Studio” to “help brands maximize their own live content efforts.”

Twitter also announced its foray into original content. In-house creator network Niche is working with talent like chef Tyler Florence and actor Josh Peck on original series, and will incorporate in-stream video ads into those shows.

The company says it has been trying to make its programming a two-way street, launching programs based on platform trends.  To that end, four shows based on its “#HereWeAre” hashtag will launch, produced by Buzzfeed, Vox Media, History and HuffPost. The company also picked up programming related to “#BlackTwitter,” with a program from BET and a live program from Will Packer Media.

Execs also focused on a message for marketers: “What makes Twitter unique is that messages from brands are a natural part of the conversation. Twitter audiences expect brands to join the conversation, and 82% of people actively engage with brands on Twitter," said company CMO Leslie Berland. “Twitter is the place to watch what is happening, and to talk about it."