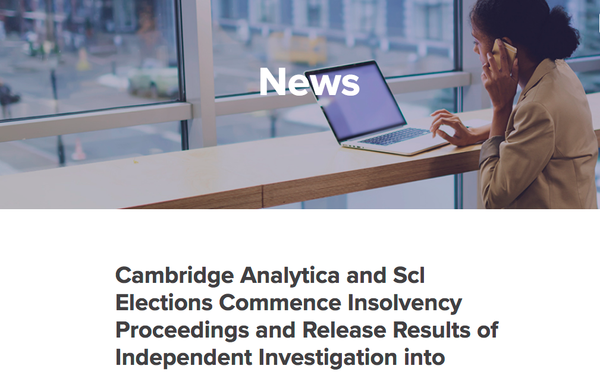 “The company is immediately ceasing all operations,” the London-based company said in a statement, adding that “parallel bankruptcy proceedings” would soon begin on behalf of the company and its U.S. affiliates in the United States Bankruptcy Court for the Southern District of New York.

The company asserted that it has been the “subject of numerous unfounded accusations” for several months and claimed that despite its efforts to set the record straight, it “has been vilified for activities that are not only legal, but also widely accepted as a standard component of online advertising in both the political and commercial arenas.”

The company no doubt was alluding to press coverage, as well as testimony in U.S. congressional hearings that it illicitly or illegally appropriated personal data of millions of Facebook users via a third-party app that it continued to use to target unsuspecting Americans.

The company also disclosed that Queen’s Counsel Julian Malins has been retained to conduct an independent investigation into the allegations regarding its political activities. The report by Malins and Linda Hudson, which the company posted on its website today, concluded that the allegations were not “borne out by the facts.”

Despite its claims and the findings of the report, Cambridge Analytica stated, “it has been determined that it is no longer viable to continue operating the business, which left Cambridge Analytica with no realistic alternative to placing the company into administration.”