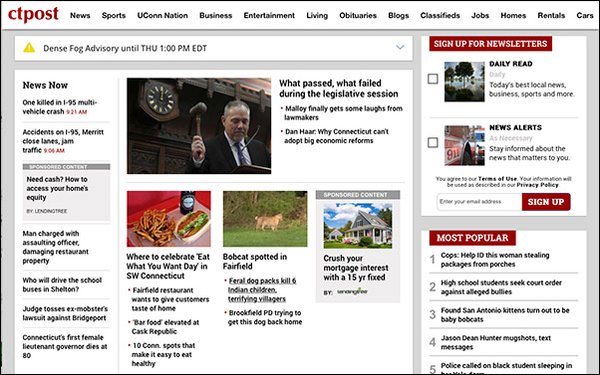 Hearst Newspapers will announce a partnership Wednesday to test pay-per-article technology on five of its publications. The platform from SolidOpinion also enables advertisers to hand-select the articles they want their advertisements to serve near. The service will focus on breaking news.

The text-based ad, called a Promoted Headline, serves up directly above the breaking news headline.

Advertisers pick the keywords and set the type of breaking news topics. The brand then bids on a specific topic and location. Once an article on that topic publishes in the specific section, the ad will serve up directly above the headline in the online publication, explains Fergal Carr, senior vice president of consumer product at Hearst Newspapers.

In the past, advertisers would bid on a page -- for example, the home page -- without knowing the types of articles that will appear. This type of bidding cannot ensure that a specific type of consumer will view the ad.

"I have had advertisers ask me 'can I be on the home page only when there’s happy news',?" Carr said. He said advertisers can buy media in the sports section, but they could not hand-select articles to appear by.

Programmatic enables advertisers to buy ad space based on an audience, but marketers don’t know the type of content the brand will be associated with, he said.

This move represents Hearst’s foray into the pay-per-article model. The desktop and mobile versions began rolling out late Tuesday. It’s an opportunity to highlight the publication’s “article page,” which lists the content. Carr said this is where the majority of committed readers begin to explore the articles -- not through search engines or on social sites.

Initially, Hearst will test SolidOpinion’s pay-per-article technology on Chron.com, SFGate.com, MySA.com, CTPost.com, and SeattlePI.com. For example, go to Chron.com and type on the name “Christian Covington,” a football defensive end for Houston, and a text ad for SMS Gym serves up.

“These are the highest traffic sites, and eventually we’ll push it out to other communities,” Carr said.

The partnership opened a new premium ad spot on these five Hearst publications. “We’re hoping to improve both local and regional ad buys,” he said.