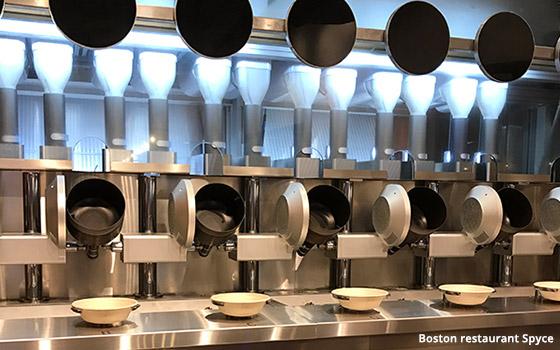 Combining sophisticated technology with a touch of human know-how can end up providing some high-value sustenance.

That’s what four MIT graduates and a famous chef ended up doing, creating a robotic, fast-casual restaurant in downtown Boston.

I dropped into the newly opened Spyce to check out the robots along with what they dish out.

The robotics kitchen is front and center in the restaurant, with seven cooking woks, basically cylinders that use an induction heating element adjacent to each cooking wok. There are large screens from which customers place their order, which starts the process.

The name of the person who placed the order appears at a screen above the robotic chef, so the customer can watch the food being cooked and processed right in front of them.

Based on what the person ordered, the ingredients are automatically poured into the cylinder from behind and the process starts, with the entire event taking a total of three minutes or less. When complete, the robotic device swings out, pours the steaming meal into a dish and then goes into a cleaning and sanitizing cycle.

“The technology allows us to provide high-quality meals,” Brady Knight, one of the four MIT grads who founded the business, told me.

“It’s more efficient in front of house,” said Knight, who noted that seven meals can be cooked simultaneously. 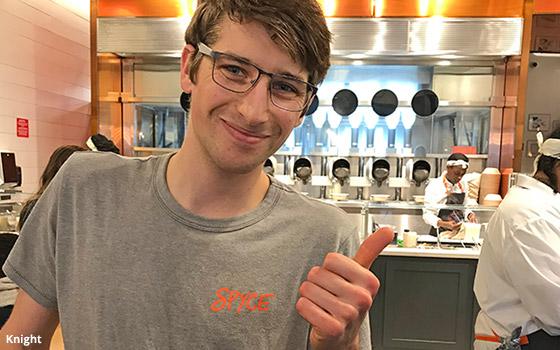 It’s worth a visit to Spyce just to see the robotic chefs at work. However, technology without food expertise was hardly a guarantee for the grads who created the robotic kitchen.

In stepped Daniel Boulud, a world-famous chef who owns the flagship Daniel in New York along with bistros and cafés in London, Miami, Montreal, Singapore, and Boston. Boulud listened and saw what the team had in mind and ultimately became the food brain (and investor) behind the venture. Boulud is now the culinary director of Spyce.

There still are people involved, including greeters to get customers going on the screens for ordering, which are easy and obvious to operate, since meals comprise only a series of bowls, such as Latin, Chicken and Rice, Thai, Beet, Indian and Moroccan. There also are two employees who are handed the meals by the robotic chefs and then add any requested final touches in the way of garnishes.

The Spyce team did create an impressive robotic food-prep system, for which they’ve filed for patents, and obviously took to heart the food content insights from Boulud.

The food is fresh and tasty, based on my experience along with many others I heard from on site.

In addition to the robotic chefs and high-quality food focus, the restaurant provides a likely reason for customers to return: value. The large bowls, cooked and served in three minutes, cost $7.50.