Price For TV Networks With Fewer Ads? A Modest 7% Premium 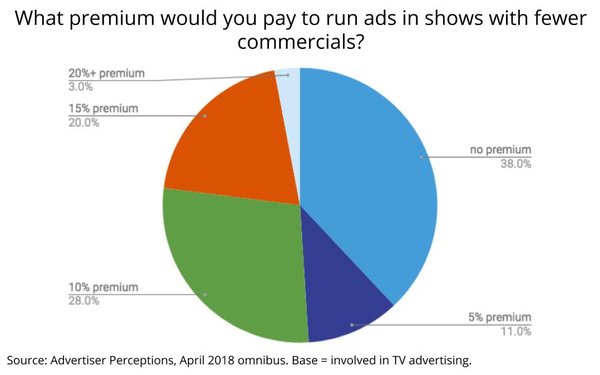 Many media-buying TV executives applaud the TV networks that are looking to reduce commercial clutter. But paying a big premium for those fewer commercials is not likely.

Marketing and media agency executives said they would be willing to pay only a 7% premium on the networks that have trimmed back on TV ad clutter, according to an Advertiser Perceptions April survey of 304 executives.

A number of new TV network groups are looking to reduce ad clutter this year, including Fox and NBC. Turner and Viacom had initiated efforts to reduce commercial clutter in previous seasons.

Media executives said they would not be more inclined to increase spending with networks running fewer commercials: 58% said they wouldn't spend more.

Forty-two percent of media executives said they would spend more with the networks that are running fewer ads -- 49% of marketing executives and 38% of media agency executives.

The survey also looked at overall TV upfront ad-buying activity -- 36% said they would be buying during the upfront market; 27% before the upfront; and 37% during the quarter-by-quarter scatter advertising market that follows the June-September upfront TV ad marketplace.