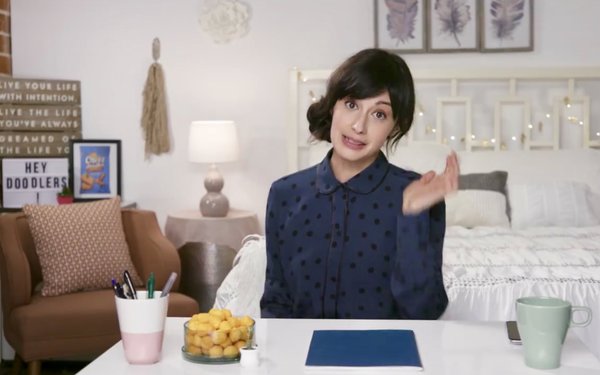 Wise Foods and agency Kastner & Partners (K&P) are seeking to "edge up" the heritage Cheez Doodle snack food brand with a digital-only campaign.

The "Doodle Method" campaign is an original scripted six-episode series that follows a quirky life coach, Lindsay Conner, in her quest to help people solve their everyday problems through her self-developed Cheez-Doodle-based techniques.

This branded content series is a new strategy for the 97-year-old snack brand. “To reach a younger audience and show how Cheez Doodles embodies a ‘live young’ mentality, the creative, off-beat, seemingly unbranded content is exactly what we needed for an audience that is tired of traditional advertising," stated Jeremy Bjork, chief marketing officer, Wise Foods.

Released in its entirety, the complete body of work has media support from Thrillist to drive viewers to The Doodle Method Facebook page. Already the original trailer video has more than 61K views.

“The Doodle Method campaign is a simple premise with over a half-hour of content that never feels like an ad… it’s fun to watch," adds Brandon Rochon, CCO, K&P. "And, that makes all the difference.”

Wise first began working with K&P in February 2017 as it looked to revive the Cheez Doodle identity to resonate with the new generation of Millennial and Gen Z consumers.