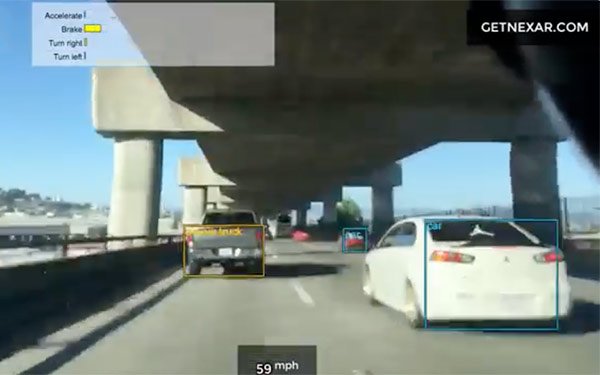 In addition to more screens and in-car streaming entertainment, one of the promises of connected cars is the ability to tell when a traffic light will change to red or green.

Audi recently introduced a feature called Traffic Light Information, so its cars could communicate with the traffic infrastructure in certain cities, which has been tested in Las Vegas for some time.

Intel also may be interested in some version of this, by acquiring Mobileye for $15 billion last year. The Israeli company’s hardware and software can detect road markings and identify and read traffic signs, traffic lights and directional signs and also can analyze a visual field to anticipate potential collisions with humans, vehicles and other kinds of obstacles, as well as create a map of drivable paths for autonomous vehicles, according to Intel.

Now Nexar, another Israeli-based company, is aiming to one-up everyone, by providing real-time information about the phase of every traffic light in any given city. Nexar is making its Lights API available so that municipal partners and rideshare companies can leverage the live insights to optimize routing and travel times.

The system uses crowd sourcing information from the tens of thousands of cars in the U.S., which use the Nexar app with either their phone camera or dashcam in their car.

“It’s cheaper and it’s more scalable,” Eran Shir, Nexar CEO, told me. “A Wi-Fi dash cam is the most used today.” Many cars, especially fleets and ridesharing vehicles, use dashcams to record accident information, which can lower insurance rates.

As cars with dash cameras travel around, they continually capture and transmit data of things around them, such as traffic lights.

“With Lights, we can predict the phase of every traffic light in a city,” said Shir. “Seeing and mapping roads in real-time will allow Nexar and our partners to gain a detailed understanding of the streets, and the city as a whole, at any given moment.”

The aggregated information can be processed in real time and notifications, such as a traffic light is about to change color, can be delivered in fractions of seconds, Shir said.

The cars themselves are not technically being connected by the manufacturers, but they are being connected to each other through camera and smartphone data feeds and information, all managed with the help of artificial intelligence behind the scenes.

The connected car will take many shapes and forms, and now one of them is being driven by Nexar.