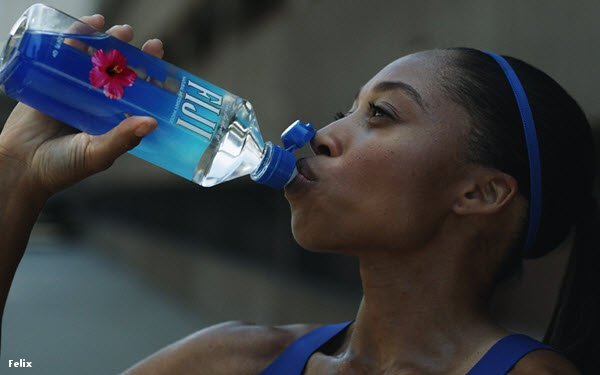 Fiji Water has tapped Allyson Felix, the most decorated female Olympian in track and field history, for TV/digital ads in a campaign promoting the water brand’s new sports cap bottle.

The creative (30-second version below) starts with an aerial view of Fiji, following a drop of rain as it falls through the clouds and lush, mountainous terrain to reach its source. It then segues to show Felix running through an urban setting and drinking Fiji Water out of the sports cap bottle to rehydrate herself.

The only messaging comes through on-screen titles stating “Fell from heaven…” (alluding to the raindrop) “to get you through hell” (superimposed over footage of Felix running). There’s also a 15-second version of the Felix ad.

In addition, there are 30- and 15-second versions of another ad that uses the same raindrop footage and running/drinking scenario, but features a male runner instead of Felix, as well as different title messaging (“What falls here… will rise here”).

The ads, from the brand’s in-house agency, the Wonderful Agency, are airing on primetime network and cable TV shows including “The Bachelorette,” “Supergirl” and “America’s Got Talent,” as well as featured on YouTube.

The new sports cap bottle is available for $2.29 on Fiji’s store/home delivery site, as well as in stores nationwide.