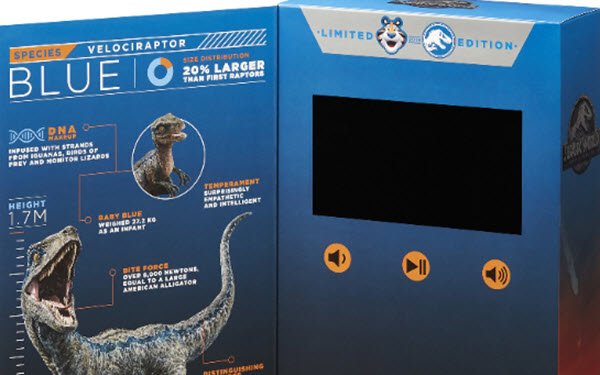 The boxes, which have 7” embedded digital screens, show more than five minutes of behind-the-scenes footage from “Jurassic World: Fallen Kingdom,” premiering in theaters on June 22.

The Frosted Flakes box shows a velociraptor from the new movie, while the Keebler cookies box shows footage of a Tyrannosaurus Rex.

The packages are being sold exclusively on Amazon, for $24.99 each, while supplies last. That won’t be long: Kellogg has reportedly produced a total of only 200 of the boxes.

The cinematic tech packaging is part of a larger Kellogg’s marketing deal with Universal Pictures.

The boxes of some Kellogg's products now in stores feature images from the movie (a “prehistoric makeover,” in the company’s description). Some product boxes are offering chances to win tickets to the movie, and some cereal boxes contain movie-themed popsicle molds.