Net new advertising investment this year will total $24 billion -- the highest annual incremental increase since the $26 billion posted in 2010.

The WPP media unit also adjusted its estimate for 2017, now reporting that last year’s ad expenditures grew by 3.5% -- higher than the December estimate of 3.1%.

Excluding China, Facebook and Google captured 135% of the growth in digital advertising investment in 2017, according to GroupM’s analysis. However, it qualified that assessment, noting that the line between “digital” and “broadcast” continues to become less distinct. Ad revenue flowing into the IP-delivered services of broadcast TV brands is counted as “digital.”

“We’d like to have better intelligence on the ways investment dollars are flowing to digital,” stated Adam Smith, Futures Director. “Digital ad revenue is reported either in whole, or by type, principally display and search, but never discriminates between large and small media owners, nor the short and long tail of advertisers who buy with or without agency support. While the same concern applies to other media, digital is unique in its long tail being dominated by global vendors. Because digital is mostly walled gardens, a country is doing well if 20% of its digital ad investment is properly categorized.” 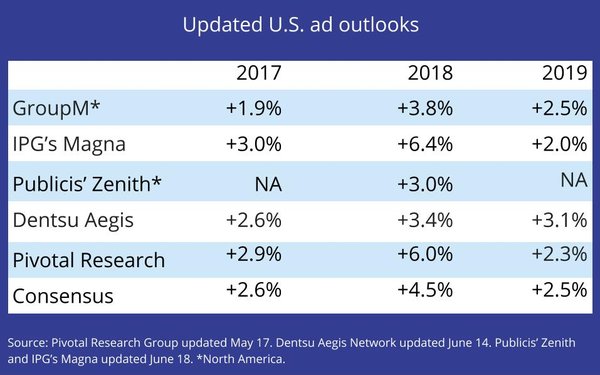