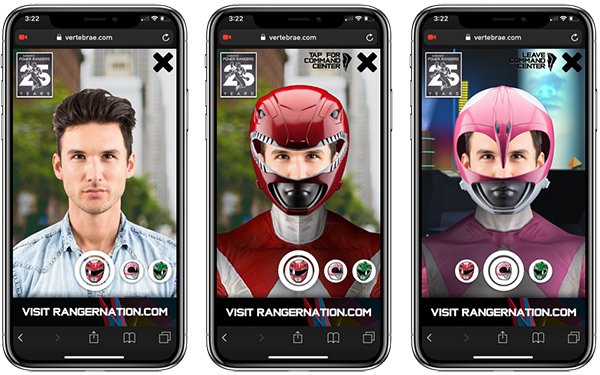 Results from an augmented reality ad campaign for Saban Brands’ Power Rangers franchise have been tabulated to determine the AR impact on time spent with the ad and click-through rates.

The campaign was delivered to smartphones through premium publisher inventory and found that recipients spent an average of 21 seconds inside the AR experience.

The AR feature allowed consumers to try on Power Ranger helmets and found that users tried on an average of at least two helmets.

The click-through rate was .21%, two and a half times higher than the industry benchmark, according to Vertebrae, the AR ad company that ran the campaign. Other AR campaigns by Vertebrae also averaged interaction times of more than 20 seconds.

While using the AR feature, 85% of users took a photo inside the experience. The ad included a green-screen feature that teleported the users in and out of the Command Center, and on average, one-third of users tapped into it.

Consumers targeted were 26 to 42 years old and using augmented reality was an opt-in feature.