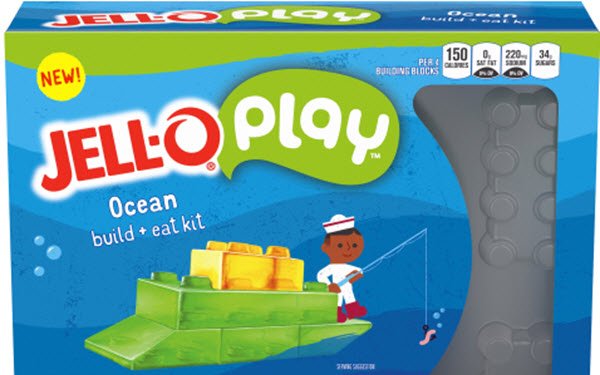 Case in point: The 121-year-old Jell-O gelatin and puddings brand is launching a line of edible toys.

Jell-O Play gelatin toys can be molded, shaped and used to build a wide variety of objects, and are designed around themes “specifically chosen to spark kids’ creativity,” including ocean explorations and jungle safaris, Jell-O reports.

The line includes three variations — all positioned as engaging, creative and inexpensive.

All items are priced under $5. They’re currently available for pre-order at Amazon.com and select retailers (including Target stores, Target.com and H-E-B), and will be rolled out to retail stores nationwide over the summer.

The launch campaign, originally conceived by Droga5, Jell-O’s former agency, was implemented with AwesomenessTV’s in-house branded content studio, Wildness, according to the brand.

A 60-second animated video, “Bring Your Kitchen to Life” (below), is a centerpiece for the kickoff of the campaign, which uses animation and CGI to demonstrate the toys’ “unlimited possibilities for creation and play inside of the kitchen,” says Jell-O.

The video will be shown in cinemas nationwide through July 6, as well as used in the broader digital and social media marketing campaign, called “Think it. Make it. Eat it.”

The Jell-O brand extension is the latest of many recent examples of aggressive new marketing initiatives aiming to reignite buzz and accelerate sales for iconic Kraft Heinz brands. Another was Heinz's launch of the mayo/ketchup blend Mayochup, which went viral for a time in April.