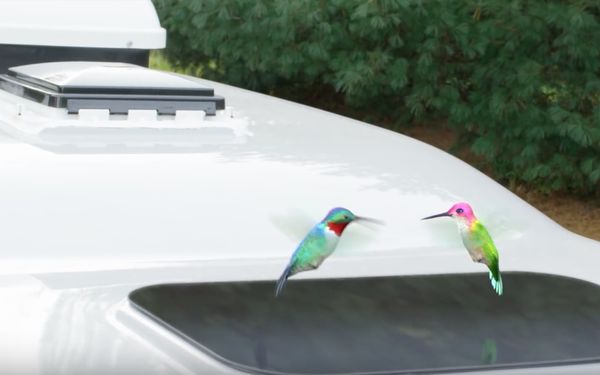 Airstream, the iconic RV/trailer company, is introducing a new fiberglass travel trailer, Nest, that it hopes will appeal to a younger generation.

The company and its creative agency, Dayton, Ohio-based Upward Brand Interactions, turned to Calabash to create a pair of animated hummingbird characters named Gigi and Dave that serve as tour guides in the online campaign. A second spot will post in late July and a third in the fall.

“The expectations for the launch of the Airstream Nest were very high and so we wanted to make sure that we had partners that could provide both creativity and technical expertise,” said Jean Silverstein, senior client strategist at Upward Brand Interactions, in a release.

The first one-minute spot, “Introducing Nest,” is running on the company’s website, social media channels and on kiosks in Airstream showrooms and auto/RV trade shows.

It opens with the hummingbird couple Gigi and Dave debating whether a particular tree will make a good nest location. Dave loves it because it’s so “branchy,” but Gigi calls it “pedestrian,” which leads them to look elsewhere and discover an Airstream Nest nearby.

As they fly in for a closer look, Dave loves it because it’s all “roundy.” From there, Gigi and Dave take a tour of the Nest both inside and out. One shot shows Dave testing out the Nest’s bed by falling gently onto the mattress and stretching out while gazing through the moon roof above.

The project was full of creative challenges, such as how to depict the speed with which hummingbirds’ wings flap, and how big the tiny birds should appear when next to or inside the Nest. For Creative Director Wayne Brejcha, the key to the spot’s success centered on finding the balance between reality and a cartoon feel.

“Character animation has the flexibility to be both silly and sophisticated. With Airstream, we were aiming for something towards sophisticated and realistic,” Brejcha stated. “But we also needed the birds to break out of strict nature, to do playful or human things. Defining their unique mix of silly and photo-real was a fun challenge for us and the agency creatives."