Dentsu Most Acquisitive Holding Co. During First Half 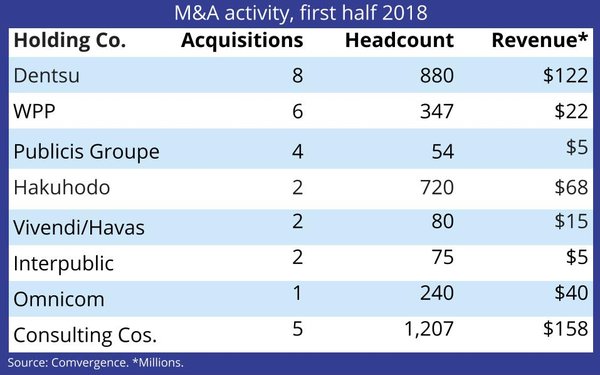 With eight acquisitions during the first six months of the year, Dentsu was the most active of the major agency holding companies on the M&A front during the first half, according to an M&A benchmarking report released this week by Comvergence. Dentsu’s eight purchases represent an aggregate addition of 880 people and $122 million in annualized revenue.

On a numeric basis, WPP ranked second with six acquisitions of mainly smaller organizations and revenue.

While Interpublic ranked only sixth among the major agency holding companies tracked by Comvergence, that should change in the second half with its $2 billion-plus acquisition of the marketing services division of big data firm Acxiom.

The report also delineates an aggregate of the major management and technology consulting firms, but Comvergence notes that one of them -- Accenture, through its digital division Accenture Interactive -- has been the most acquisitive player of the past three years.

“The firm, which added 5,379 in staff, mostly buys large and reputed agencies in the digital environment,” the report notes, adding, “These deals are instrumental in the development / expansion of Accenture Interactive globally, although most of the agencies they acquired retained their branding and stand-alone positioning.” 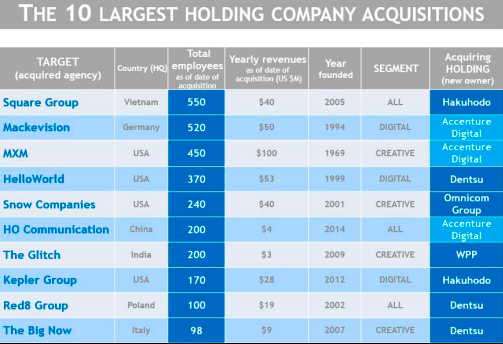