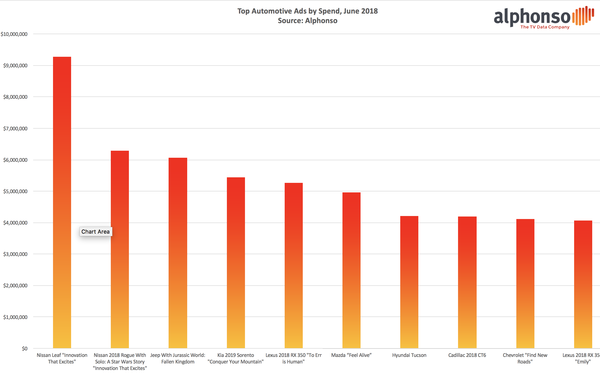 Nissan was the top automotive spender in broadcast in June, nabbing the top two spots, according to TV data company Alphonso.

Nissan’s spot for the Leaf came in first with just under $8 million spent. An ad for the 2018 Rogue that played up the automaker’s Star Wars marketing deal came in second at just over $6 million. Jeep’s spot focusing on “Jurassic World” came in third, just shy of $6 million.

The top 10 automotive ads in June "clearly reflect the desire for auto brands to align with big summer blockbusters, upping the creative ante in their commercials," says TS Kelly, senior vice president of research of Research for Alphonso.

“While the biggest spend was against a commercial that honed in on the Nissan Leaf's technology, the next two biggest auto ads, from Nissan and Jeep respectively, incorporated action-packed scenes from ‘Solo: A Star Wars Story’ and ‘Jurassic Park: Fallen Kingdom,’ lending some Hollywood excitement in to the brand messaging,” Kelly tells Marketing Daily.

The Nissan Rogue commercial almost broke into the top 10 in May, but missed the cut since creative was divided into two different ads, Kelly says.

Kia logged the fourth and fifth highest spends on spots for the 2019 Sorrento and Evento De Verano, a Spanish-language spot playing up its “Best Value” summer sales event.

Rounding out the top 10 spenders are ads from Lexus, Mazda, Hyundai, Volvo.