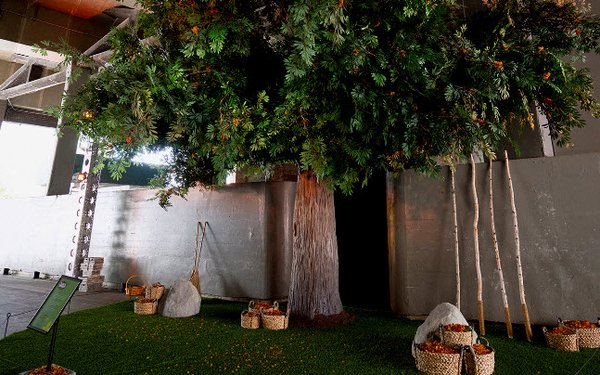 Along with sometimes-oppressive heat, summer in New York City brings al fresco lunches … and a plethora of sampling events and promotions.

The 20-foot “gummy tree” installation (above) was designed to tie in with Black Forest’s new campaign featuring a fictional, forest-based world where lederhosen-clad folk harvest gummies from trees.

During Aug. 2 and 3, High Line visitors could partake of some of the 10,000 gummy and fruit snack samples on hand, watch actors dressed as “People of the Black Forest” harvest gummies, and perhaps get a look at actor/model/mom Brooklyn Decker during her appearance for the brand.

The installation was created by Troika/Mission and Joan Creative. Joan also created the overall advertising campaign.

Knorr, meanwhile, jumped on National Farmers Week for a promotion, from Aug. 5 to 9, for its new Knorr One Skillet Meals starters.

Knorr partnered with experiential technology platform Fooji to allow Manhattan residents to order a free delivery of one of the meal starters, along with the fresh, New York-area-produced ingredients needed.

To get a free delivery, residents can tweet #KnorrToMyDoor + [carrot emoji] to @Knorr to receive a link, then simply order, specifying a choice of one of two Skillet Meal varieties (Lemon Chicken with Barley, or the vegetarian Rustic Italian White Bean with Farro).

Participation is limited to one order per household per day during the promotional period, while supplies last.

The Fooji partnership activation is a pilot, and Knorr hopes to extend the promotion to other cities in future, according to a brand rep.

The new One Skillet Meals, which are free of artificial ingredients, come in six varieties. The single-skillet meals take about 30 minutes to prepare.