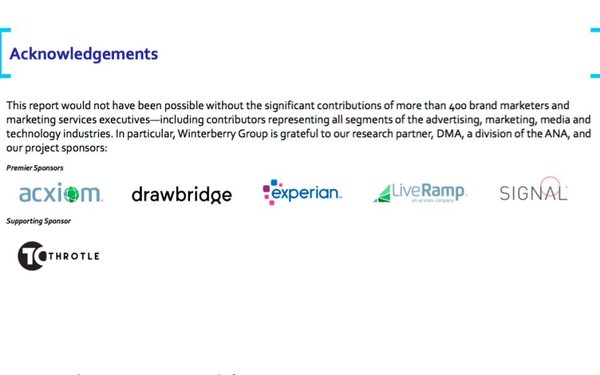 The Association of National Advertisers (ANA) appears to be getting in the sponsored content business. In a surprise development, it published a report Thursday that was sponsored by six industry suppliers: Acxiom, Drawbridge, Experian, LiveRamp, Signal, and Throtle.

The report, “Know Your Audience: The Evolution of Identity in a Consumer-Centric Marketplace,” was developed by the DMA (Data & Marketing Association, which the ANA recently acquired, and The Winterberry Group.

An ANA spokesperson said it was the first time the ANA has published a sponsored report, but noted it has been a common practice by the DMA. He said he expected the DMA to continue that practice, but the ANA itself has no plans to publish additional sponsored reports, “except perhaps those commissioned by the DMA division of the ANA.

“The fact that we are doing it this time does not mean it’s a change in policy or direction,” the spokesperson continued. "It’s a single report that we inherited that happens to be sponsored."

The fact the ANA has published an industry report sponsored by industry suppliers is newsworthy, since sponsored content blurs the line of whose agenda content -- especially an industry study -- it represents. Industry insiders sometimes refer to the practice as "pay-to-play," because sometimes, the sponsorship payments influence how the sponsor’s agenda is played.

The ANA has been one of the most vociferous champions of transparency and neutrality regarding marketing services practices in the past several years. It has even won several MediaPost awards related to those efforts.

On the plus side, it fully disclosed that the new report was sponsored by vendors. On the downside, it raises questions about the neutrality of the report's findings.

Asked what the reports sponsors received in exchange for their payments, the ANA spokesperson said they include:

· Logo placement on the white paper cover (with DMA, WG and other presenting sponsor logos); logo on 'acknowledgements' page of white papers; “About Sponsor” content included in white paper; acknowledgement in promotional materials