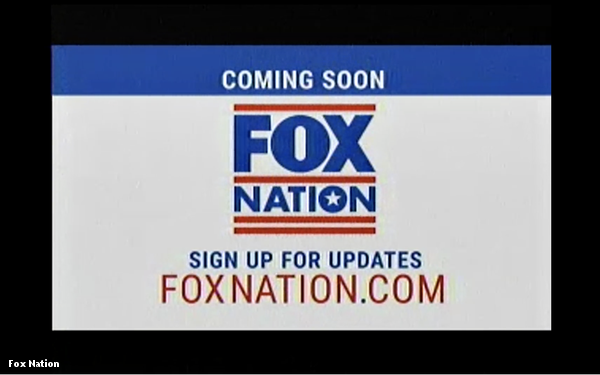 Parent company 21st Century Fox gave Fox Nation one of the strongest possible places to launch its marketing campaign: NFL football. A 15-second spot for the service ran during the “Thursday Night Football” pre-season game between the Philadelphia Eagles and the Cleveland Browns on the Fox broadcast network.

The ad itself doesn’t reveal too much new about the service, aside from the fact that it will include specials and original documentaries alongside its talk and opinion programming (you can view the promo that aired during the NFL game here).

“This is our time, and this is going to be our place,” Fox News commentator Tomi Lahren said in the promo.

Fox Nation was announced in February, with the goal of creating a live streaming service that focused almost exclusively on right-leaning commentary. There will be no overlap in terms of programming between Fox News and Fox Nation, although Fox News talent like Lahren and Sean Hannity will make appearances on the service.

The service will be subscription-based, and while it will not launch with advertising, executives at Fox suggested to The New York Times that advertising or sponsorships would eventually find its way to the service. Fox News says the service will launch in the fourth quarter of this year, although a final launch date and subscription price has not yet been set.

Fox Nation will join a growing list of streaming news and commentary channels on the market. The streaming business and lifestyle network Cheddar and CBS News’ CBSN were the first to market, while NBC News is also set to launch a streaming news product later this year.

Fox’s offering is different in that it will focus primarily on commentary and opinion.