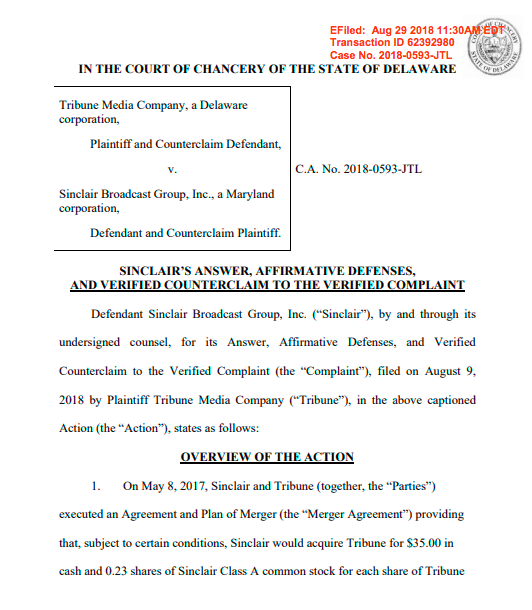 On Wednesday, Sinclair filed a countersuit against Tribune Media's suit, which in August cited that Sinclair was responsible for ending its $3.9 billion merger. In particular, it cited the handling of divestitures of TV stations necessary to comply with FCC regulations.

Chris Ripley, Sinclair CEO, stated: "As described in our filing, we fully complied with our obligations under the merger agreement and worked tirelessly to close the transaction. The company looks forward to vigorously defending against Tribune's claims and pursuing our own claim."

Among a number of counter arguments, Sinclair’s lawsuit says Tribune was fully aware of its merger plans -- including station sales. “Tribune, Sinclair and their respective counsel spent months working together to advocate for the transaction with regulators,” according to the claim.

The FCC voiced concerns about the merger -- in particular, station sales by Sinclair. Sinclair tried to finagle the federal regulatory level for one company owning TV stations, equating to no more than 39% of U.S. TV homes.

The FCC said the proposed sales were a concern, due to some Sinclair executives owning equity stakes in companies buying those stations.

For its part, Sinclair says in its suit: “At the time the merger agreement was executed, there was significant change underway with respect to the application and scope of both the national cap [of 39%] and the duopoly rule [permitting ownership of two stations in a market].”