Ad Council-Led 'She Can STEM' Campaign 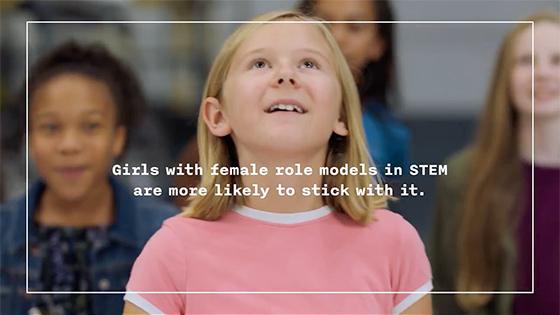 The Ad Council is tapping into its internal leadership network to help lend their support for a new national public service campaign that attempts to make science, technology, engineering and math (STEM) cool and inspiring to girls.

In what the Ad Council calls an "unprecedented coalition of partners," GE, Google, IBM, Microsoft and Verizon will help fund and promote "She Can STEM" content across their channels at launch and throughout the duration of the campaign.

The creative concept, developed with McCann New York, underscores the notion that if girls can see it then they can be it by introducing several successful STEM executives discussing their backgrounds. Tiera Fletcher, for instance, works as a structural analysis engineer at Boeing to help build rockets.

Media platforms, such as Google, Facebook, Playbuzz and Twitter, have committed to support the campaign beginning at launch. IPG media agency UM has donated its services on behalf of the project with strategy and outreach.

Twitter has also dedicated resources to building and optimizing the media to ensure "She Can STEM" reaches girls across its platform. And MTV, through a partnership with Facebook Anthology, will introduce a weekly video series on the network’s IGTV.

Brand partners will continue to show their support over the following months through online and offline activations. One component will post pictures of current female tech executives with images of their younger selves with a small note on how “if she can STEM, so can you.”