Mini Not So Mini In Countryman Effort 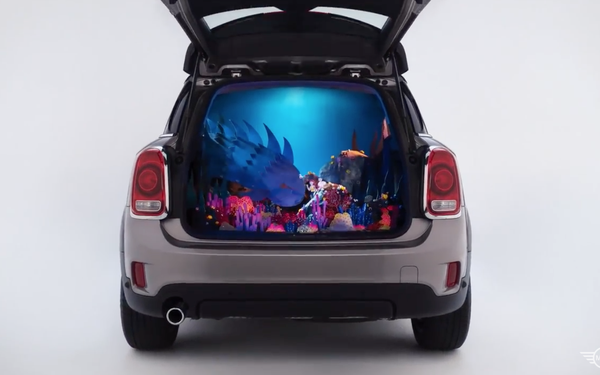 Mini USA is launching a digital campaign to show off the spacious cargo space of the Mini Countryman model.

“Created in a Countryman,” conceived in partnership with the automaker’s digital agency, 360i, uses stop-motion animation in short films created by Kirsten Lepore (known for the viral video “Hi Stranger”) and diorama-duo Nix + Gerber.

The effort demonstrates how versatile the cargo space is in the model, which was completely redesigned and re-engineered in 2017. It highlights features including sliding and folding rear seats and an adjustable trunk floor.

Creative shows how the car can handle even the biggest adventure, says Patrick McKenna, department head, brand communications at Mini, an independent brand of the BMW Group.

“The quality and creativity of the concepts conceived by these talented artists also align well with Mini’s design philosophy around the creative use of space, and our support of art and culture,” McKenna says in a release.

Each of the intricate executions took about three days to craft and film.

In “Camping,” Nix + Gerber’s campsite dioramas were shaped using various types of foam, wire, flock, dirt and rocks, while characters like the miniature astronauts were sculpted with a bakeable polymer clay

“Underwater,” Kirsten Lepore’s aquatic adventure, was designed using 20 sheets of high-grade paper reinforced with everything from toothpicks and skewers to large wooden dowels, while an overlay of plexiglass gave the ocean a shimmering quality.

A special screening of “Camping” by Nix + Gerber is planned for Sept. 17 at the BAM Rose Cinema at the Brooklyn Academy of Music. “Underwater” will screen shortly thereafter and will be featured at The Other Art Fair in Los Angeles from Oct. 24-28.