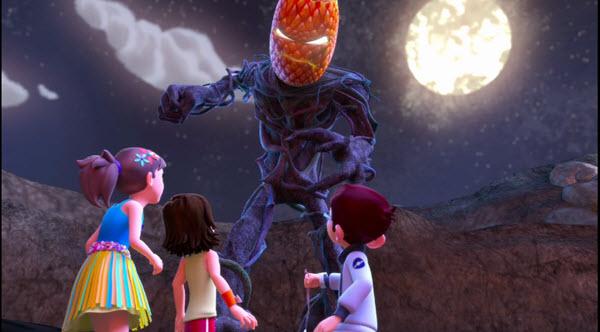 King’s Hawaiian is out to capitalize on Halloween fever this year, with the debut of an original animated feature film featuring voicing by Vanessa Williams, Mark Hamill, Tia Carrere, Noah Schnapp of “Stranger Things,” and martial artist/actor Mark Dacascos.

The 80-minute family-oriented adventure film, “The Legend of Hallowaiian,” will be shown exclusively on DirecTV Sept. 20 through Oct. 17, before being released in U.S. cinemas on Oct. 18. SC Films is distributing the film in international markets.

The brand formed its own production company, Fresh Baked Films, to make the feature film -- making it one of the first CPG companies to do so, following the high-profile summer release of “Uncle Drew” from PepsiCo’s internal Creators League Studios.

Set in the Hawaiian islands during Halloween evening, the film (trailer below) tells the story of three young friends who accidentally release a mythical monster, and must then use local legends to restore peace.

Film premieres for media will be held in Los Angeles on Sept. 20 and New York on Oct. 18.

In addition to domestic and global promotion by distribution partners DirecTV and SC Films, respectively, King’s Hawaiian is supporting the movie with 15- and 30-second TV spots from the Levit Agency, packaging and in-store displays, print advertising including a partnership with Food Network Magazine, and an event featuring MLB legend Steve Garvey and San Diego Padres players on Sept. 30 in San Diego.

The privately owned brand – which recently expanded beyond fresh bread and rolls, into BBQ sauces, and has said that its sales and profits have grown significantly in recent years as a result of a new focus on marketing -- will also run a Hallowaiian sweepstakes, and offer film-themed recipes (like Pineapplehead Turkey Sliders) online.

Driving incremental retail activations was a primary goal for the ambitious initiative, Dickens tells Marketing Daily. “In addition to driving bread category growth during Halloween -- a period traditionally monopolized by confectionary -- the film and supporting campaign will bring news to the retail environment with the support of broad distribution partners,” he says.

“From an entertainment standpoint, we intended to create a rich entertainment experience in both film and food for families during the Halloween timeframe,” adds Dickens, who says the film is “a creative process, and not only a commercial venture.”  King's Hawaiian is "open" to producing more feature films through Fresh Baked Films, he says.

Asked if a brand-produced animated children’s film is likely to create some parental concerns and generate more such debate, Dickens replies: “Brands sponsor films all the time. From the viewer’s perspective, this activation will appear no different than any other brand co-promotion of a movie.”

The handling of the branding was “subtle by design,” he says.  The brand’s products are mentioned once in the film, and shown “a few times”; Fresh Baked Films rather than King’s Hawaiian is shown as the producer; and the King’s Hawaiian name is featured “only as a co-promoter of the film, mainly in-store, where there are characters on packaging and displays,” he reports.

Of course, some consumer advocates have argued that “subtlety,” rather than prominent, straightforward declarations of the brand-originated nature of a growing array of entertainment products that now include commercial feature films, is precisely what can make such ventures questionable.

But given that the whole point of product placements and entertainment sponsorships is to promote brands while skirting consumers’ (especially millennials’) well-known suspicion of intrusive traditional advertising, PepsiCo made essentially the same case in relation to the “Uncle Drew” movie, a character that originated in Pepsi’s popular series of commercials.

“Principals involved with the movie insist that while the film may have originated with a company best known for its soda, the integrity of “Uncle Drew” as a film is genuine,” wrote The New York Times. ‘I would say that you -- we -- would be pretty foolish to view this as a two-hour-long commercial,’ [said Lou Arbetter, general manager of Pepsi Productions]. ‘I think that would not do the brand any good.’”

Jim Miller, an executive vice president of the movie’s distributor, Lionsgate, added: “Honestly, aside from they’re our partners, it has nothing to do with Pepsi. If there wasn’t a great story in there, we wouldn’t have engaged.”