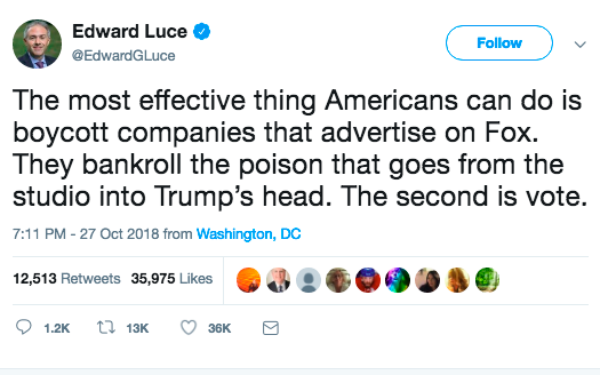 Fox News Channel is facing another potential ad boycott, this time sparked by a top newspaper editor who called it “the most effective thing” Americans can do to rein in the cable network’s hate-mongering coverage.

"Boycott companies that advertise on Fox," Financial Times U.S. national editor Edward Luce tweeted Saturday in response to the network’s incessant coverage of the Latin American "caravan," which some believe sparked the massacre at the Tree of Life synagogue in Pittsburgh.

"They bankroll the poison that goes from the studio into Trump’s head," Luce continued.

Left-wing media watchdog Media Matters also weighed in with yet another call on advertisers to pull out of Fox News Channel.

"We urge Expedia, McDonald's and Capital One, as well as other major Fox News advertisers, to talk to their media buyers, listen to their customers, and consider suspending their relationship with Fox News until the network makes meaningful changes to curb its propagandistic narratives that intentionally spread disinformation and incentivize violence," Media Matters President Angelo Carusone said in a statement released Monday night, including a link to a list of current Fox News advertisers.

“We cannot and will not allow voices to be censored by agenda-driven intimidation efforts," Marianne Gambelli, president of ad sales for Fox News and Fox Business Network, said in a statement, adding, "Media Matters continues to turn a blind eye to every television network but Fox News since it’s the only outlet that doesn’t subscribe to their extreme left-wing political agenda.”

Editor's Note: This article has been updated from a previous version.