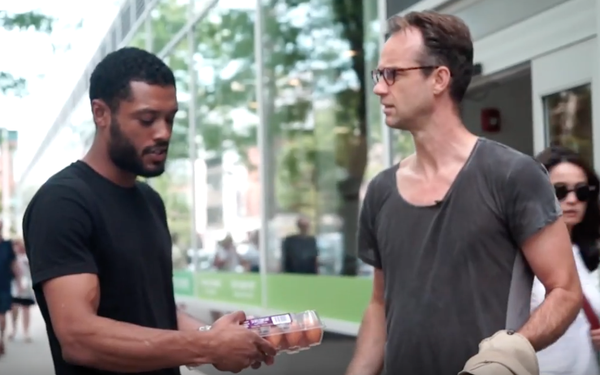 People for the Ethical Treatment of Animals' latest campaign aims to shatter what the organization calls the “humane myth” regarding free-range eggs.

A video created in-house by PETA’s Online Video Lab team shows Whole Foods shoppers in Brooklyn reacting to the reality of the "free-range" eggs they've just bought. They are shown video of chickens who may not be in cages, but who are crammed into a barn.

Well-meaning consumers are often duped into buying "free range" or "humane" eggs with wildly unrealistic visions of rolling hills and chickens scratching around in the dirt, according to PETA.

PETA's 2018 investigation into a leading supplier to Nellie's Free Range Eggs showed tens of thousands of birds crammed into filthy, windowless sheds with only a small hatch, which is locked for much of the day.

These chickens had just 1.2 square feet of floor space each, which is barely larger than their bodies.

As one Whole Foods shopper says in the video, "That is not what I imagined 'free-range' to be."

But Nellie's website claims that hens whose eggs it uses "roam and strut throughout their wide open pasture."

The reaction of the shoppers includes “betrayed,” “false advertising,” “disgusting” and “another big lie.” Every shopper who viewed the footage said that they would never buy Nellie's Free Range Eggs again.

Industry surveys have found that over 60% of consumers find chicken labels confusing and that the majority mistakenly think that "cage-free" and "free-range" mean that the birds have been raised outdoors, according to PETA.

No reasonable shopper would think that "free-range" means that hens are crammed together so tightly that it's hard for workers to avoid stepping on them, says PETA Executive Vice President Tracy Reiman.

“PETA's new video—which shows the reactions of actual customers as they learn that 'free-range' and 'humane labels are nothing more than marketing schemes meant to mislead them—will soon be shared on all of PETA's social media channels,” Reiman tells Marketing Daily.

In 2017, PETA’s videos received more than 1 billion views across all platforms, she says.

According to PR News, PETA has the "Best Social Media Team" of any advocacy organization—and that includes all the groups that focus on issues other than animal welfare.