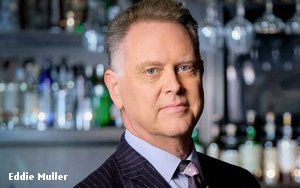 That’s right -- the intros. Because whether or not the films themselves are great, host Eddie Muller -- aka “the czar of noir” -- makes his intros thoroughly entertaining.

After an opening of evocative music and imagery, Muller — a walking encyclopedia of the “film noir” dark crime dramas of the 1940s and 1950s — proceeds to provide seven minutes or so of such enthusiastic backstory that it’s hard not to watch the film that follows.

He will open with a line like last week’s “Welcome back to Noir Alley, Turner Classic Movies’ safehouse for cinema’s most charismatic cops, crooks and crackpots.”

Then, he will provide backstories not only on each film’s stars and director, but also the people you don’t usually hear about, such as writers, cinematographers and executives from small studios.

Muller knows how to turn a phrase. Describing “The Damned Don’t Cry,” a 1950 film starring Joan Crawford repeating a formula that she and her producer had perfected several times before: “Once Joan found something that works, she chewed on it like a junkyard dog.”

“The Damned Don’t Cry” turned out to be a damned good movie. But that’s not always the case.

Recommending “Desperate,” a 1947 flick about a trucker and his wife on the run, Muller did admit that “you could drive a truck through some of the plot holes.” That was too much for me, a connoisseur of logic even in fantasies, so I only made it through some 20 minutes of the 73-minute film.

If, on the other hand, you enjoy any of “Noir Alley’s” movies enough to watch them all the way through (many run well under 90 minutes, so it’s not too hard), you’ll also be treated to Muller’s outros, providing even more insights for five minutes or so.

Then you’ll get a teaser for the following week’s film, such as: “Next week: ‘The Hunted,’ an obscure 1948 noir. Be here when I reveal the fascinating story of its remarkable star, Belita, for whom I’ve carried a torch for many, many years.”

Of course, that ensured I would be back. “The Hunted” turned out to be a stylish film starring Belita, a former Olympic figure skater, as “a paroled jailbird who just happens to be a fabulous ice skater.” Belita, Muller says in his intro, “displayed a confidence and charisma, almost a haughtiness, that set her above the cheapness of her B-level productions and the mechanics of their generic plots.”

Finally, ending the outro: “Despite my fondness for Belita, you’ll never get me near a skating rink. I’ll stick with my ice in cube form.”

This weekend’s movie? “’The Sniper,’ a film that’s still startling 66 years after its original release.”

I’ll be there, if just to hear what Muller finds so startling.

You too can catch Muller’s act, Saturday nights at midnight ET/PT, Sunday mornings at 10 a.m., or on demand via the Turner Classic Movies app.