Audi Gets Animated In 'Spies In Disguise' 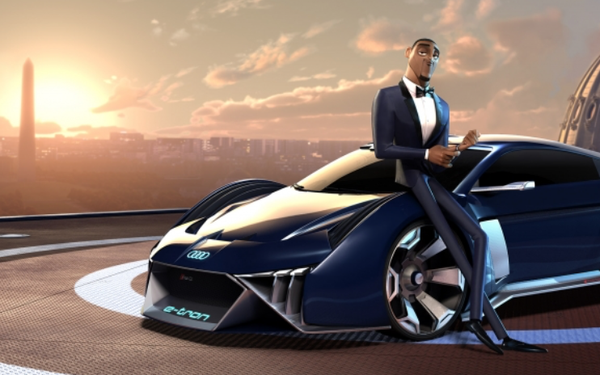 Audi brings futuristic design and mobility to the big screen for the first time with the Audi RSQ e-tron, a two-seater fictional concept car that has special features for secret agents.

In the Twentieth Century Fox movie "Spies In Disguise," super agent Lance Sterling, voiced by Will Smith, shows off the fully electric model, created by Audi Design in cooperation with Blue Sky Studios.

The  trailer for the animated family film, set to be released September 2019, gives the first glimpse of the futuristic car.

In the movie, Sterling needs a performance car that will complement his prowess. He gets one with equipment features such as a hologram speedometer, fully automated driving mode and other Audi assistance systems.

“Audi takes a digital, forward-looking approach to the design process, both in developing fictional content and in the production modeling studio,” commented Frank Rimili, head of exterior design for concept vehicles at AudiAG, in a release.

“An international espionage story with future technologies that can save the world is the perfect match for the Audi brand,” Perosino says in a release. “Similar to our cars, fun, innovation and performance are key elements of the storyline.”

“This project was the perfect opportunity to highlight Audi’s e-tron technology and give our intrepid spy, Lance Sterling, his own signature spymobile,” Williams says in a release.