'Shut Up and Dribble' Scores For Showtime 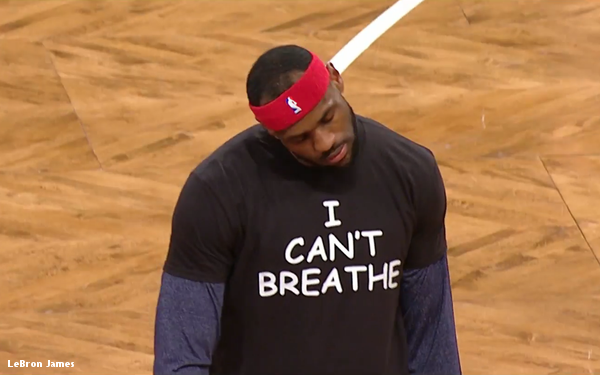 After several top players of the NBA Champion Golden State Warriors refused to be feted at the Trump White House, Ingraham became further incensed when James, of the losing Cleveland Cavaliers, said Trump "really doesn’t give a f… about the people."

How we got to the point when black NBA players, in sharp contrast to those in the NFL, can be so politically outspoken without incurring the wrath of league officials is the subject of the documentary, which James himself executive-produced.

James is interviewed in the doc, of course, along with such other influential NBA greats as Bill Russell, Oscar Robertson, Julius Erving, Isaiah Thomas, and Charles Barkley, all of whom in their own ways changed both the game and its influence in the black community.

As you might expect, the person who most changed the game, and became its biggest cultural icon, is not interviewed.

That, of course, would be the Chicago Bulls’ Michael Jordan, whom we suspect Ingraham has never lectured about shutting up and dribbling.

A telling moment comes when the North Carolina native is asked to step up in the final days of the tight 1990 North Carolina Senate race after Republican incumbent Jesse Helms has unleashed a racist appeal against black Democratic candidate Harvey Gantt. Instead, Nike brand giant Jordan says, "Republicans buy sneakers, too." Helms gets re-elected.

When the Bulls show up to be feted at the White House, Jordan isn’t there, but teammate Craig Hodges shows up dressed in a dashiki and hands President George H.W. Bush a note about how young black men are an "endangered species" in the U.S.

Hodges is soon blackballed out of the NBA, but is symbolic of a new era epitomized by Charles Barkley, who films a Nike commercial declaring that he’s no role model, and Alan Iverson, who brings a hip-hop sensibility to the league.

That era effectively ends in April, 2004, when a player brawl spills into the stands during a game in Detroit. The documentary shows how the media at the time reacted with what may be seen as racially coded venom, including NBC’s Bob Costas decrying “too many players with a thug mentality.”

In one of the doc’s best moments, Costas is asked about those comments 14 years later. He hesitates for a long time, considering his words carefully, and finally says, “Today, you don’t use that word because it’s become a euphemism for a different word.”

A dress code and other changes get instituted.

But by 2012, the league’s newest superstar — LeBron James — is ready to play by his own rules.

That’s when unarmed black teen Trayvon Martin is killed 27 miles away from Orlando, where the NBA All-Star Game is about to tip off. James later writes “RIP Trayvon Martin” on his shoes and joins other players in wearing hoodies to practice.

Then, in 2014, after Eric Garner is killed in a chokehold by New York police, James wears a T-shirt sporting Garner’s dying words, "I Can’t Breathe."

Also in 2014, after leading the Miami Heat to two titles, James returns to his hometown Cavaliers determined to bring a championship to Northeast Ohio. He does just that in 2016. At the victory celebration, we see someone holding up a sign reading, "LeBron 4 President."

A year later, on the eve of the NBA finals, someone paints the "N" word on James' house.

The Warriors win those finals and to protest President Trump, refuse to go to the White House.

The losing LeBron, in his own form of protest, sets out to produce "Shut Up and Dribble."

The least we can do is shut up and watch.