Hearing The Call: How Oticon Uses Email To Speed Up Hearing Aid Sales 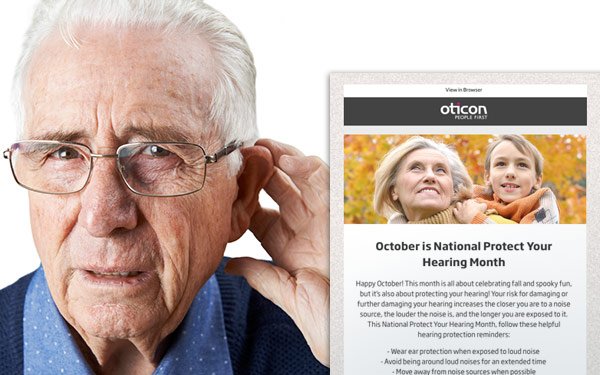 Many of us will need hearing aids at some point in our lives. But will we be ready to accept them? That’s one of the challenges faced by Oticon, a hearing aid manufacturer that has been around for about 100 years.

The long trip through the sales funnel typically takes from five to seven years, and people have to be gently brought along at every stage, says Stephanie Young, director, digital strategy and e-commerce for Oticon.

That’s where email comes in. “Once we capture lead, we nurture that lead,” Young says.

The hearing aids are not sold via email — this is a direct-to-consumer effort, meaning that hearing care professionals sell the devices and the patients ask for them. The doctors also get monthly emails.

Oticon previously relied mostly on traditional marketing channels, but when Young came on board about five years ago, she began moving it toward digital.

“The landing pages were developed specifically for this campaign,” he says. People who responded on the relevant page were then brought into the email program, their addresses being obtained directly or through locators.

Those prospects get monthly emails based on their segment and stage in the funnel, Young explains. They are deemed live leads because they apparently have taken the first step in seeking care — admitting that there is a solution.

One recent email, with the headline “October is National Protect your Hearing Month,” offers tips for protecting yourself.

Why does it take years to snare a sale? “People have misconceptions about what it is — they think it is one of those big banana clips,” Young says. “It’s not like if you have bad eyesight. There’s still such a stigma about it.”

Although she did not provide specific details on email results, Young said the email campaign has cut conversion time in half, and that email open rates have doubled.

Communication with end users doesn’t end at purchase — there is ongoing nurturing, upgrades and accessory sales.

"A lot of people doing the research are “children of aging parents, so we’re talking to that generation,” Young says. “We hope that when it’s time for them to take that step, they know about us.”