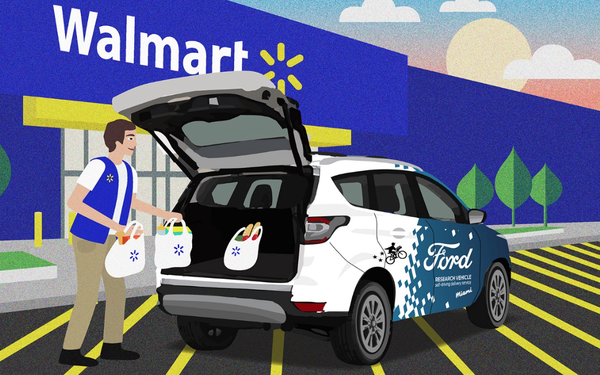 Ford Motor Co. and Walmart are teaming up to explore how autonomous vehicles could be used for grocery delivery.

“We’re already collaborating with both national and local companies to understand how we can improve goods delivery through the use of self-driving vehicles, working to transport tacos, floral arrangements, dry cleaning and a number of other items," Wolf writes. "Now, it’s time to explore how grocery delivery can help expand access to fresh food and other retail items for people all over the country.”

“We’re still learning -- it’s a pilot -- but, we want to make sure we stay on the cutting edge of grocery delivery by exploring what’s new and next,” says Tom Ward, senior vice president, digital operations, Walmart U.S.

“Walmart and Ford agree autonomous vehicles have an important role to play as we consider the future of delivery,” Ward says. “Before self-driving cars can go mainstream, we must get a better sense of how people want to interact with them. Together, we will gather crucial data to learn the best way to bring items to customers.”

Doubling down on the commercial side of self-driving technology is a safer bet for Ford, and could pay off well in the end, says Jeremy Acevedo, Edmunds' manager of industry analysis.

“Solving commercial challenges is far easier than solving commuter ones, and is most likely the area where self-driving technology will take off first,” Acevedo says.

“This partnership almost serves as a rolling demonstration for Ford to prove the value of self-driving technology to consumers in a very practical way. People may not be willing to trust a self-driving car to take them somewhere, but if the car is going to bring things to them and make their lives a little easier, suddenly the technology is a lot less scary."