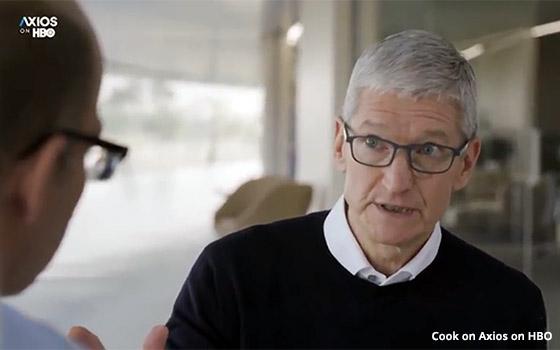 And despite Google’s business model of making money from consumer data, Cook explained the decision to let Google continue as the default search engine on Apple products during an interview with Axios on HBO.

The comments came in response to Axios on HBO asking Cook whether the company was comfortable taking billions of dollars from Google.

"I think their search engine is the best,” Cook said during the interview. “Look at what we've done with the controls we've built in. We have private web browsing. We have an intelligent tracker prevention. What we've tried to do is come up with ways to help our users through their course of the day."

Apple switched from using Microsoft Bing as its default search engine on some platforms in 2017. Bing, however, still supports image search on Apple devices.

Cook did call the way Apple relies on Google as “not a perfect thing.” But transformative technologies are typically used in unexpected ways.

He also spoke about regulations of which he’s not a big fan.

"I'm a big believer in the free market,” he said. “But we have to admit when the free market is not working. And it hasn't worked here. I think it's inevitable that there will be some level of regulation.”

Following the European Union down the road to privacy, that regulation could come from the U.S. Congress and the administration.

Earlier this month the Electronic Frontier Foundation (EFF) submitted a letter in response to the U.S. Department of Commerce's request for comment on "Developing the Administration's Approach to Consumer Privacy."

The letter urged the agency to consider any future policy proposals and laid out five recommendations for any administration policy proposal or proposed legislation regarding the data privacy rights of users online.