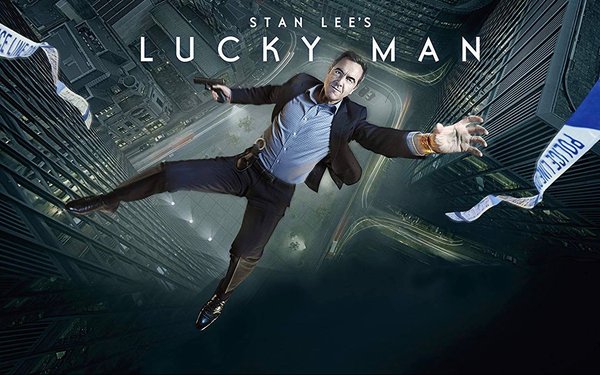 In honor of the late Stan Lee, I’ve been watching not one of his Marvel superhero creations, but what was perhaps his final major project: the very binge-able British series, “Stan Lee’s Lucky Man,” which debuted on Shudder earlier this month.

Since I knew Shudder as an all-horror SVOD service, I initially thought Lee had returned to horror, a genre he knew well during his first decades doing comic books.

Turned out, however, that Shudder has now branched out from “horror” to also include “thrillers” and “suspense” — two genres into which “Stan Lee’s Lucky Man” fits perfectly.

The show is a crime drama with the by-now-obligatory formula of a flawed hero and a murder case that interconnects with other plot lines into an ever-expanding web of complications.

James Nesbitt plays Harry Clayton, a reckless detective with an addiction (gambling). That has resulted in a messed-up personal life (he’s going through a divorce, and his wife, of course, is a defense lawyer on the very murder case that started everything) and in problems at work (naturally, he’s got a new boss obsessed with getting him off the squad).

There are tinges of wry humor, exciting pursuit/chase scenes, twist endings episode after episode, deaths of people you thought might be series regulars. Also -- almost forgot to mention -- there’s a definitely non-obligatory supernatural element: a non-removable bracelet gives Clayton the power of luck. But in a yin and yang twist, for every bit of good luck that comes the detective’s way, there might be a corresponding piece of bad luck.

As you might expect, the “superpower” element was Lee’s main contribution to the series, at least according to Wikipedia. But make no mistake, Detective Clayton isn’t a superhero, nor is he even like Lee’s Marvel super antiheroes.

“Lucky Man,” instead, is supernatural in the sense of those “Twilight Zone” characters who get something they have wished for, only to find their gifts working in ways they never expected.

So now that I’m ensconced in “Stan Lee’s Lucky Man” and sort of understanding how it belongs on the new Shudder, I have another question: “What took so long?”

The series premiered nearly three years ago in the UK, where viewers have now seen 28 episodes over three seasons.

Shudder currently offers only the first season, consisting of 10 episodes.

With Lee gone now, however, that gives us longer to savor one of his triumphs. Even if all he did was come up with the idea of someone who gets the superpower of luck, and then let others develop and write the series itself, that’s pretty cool for someone in his 90s. We should all be so “lucky”!