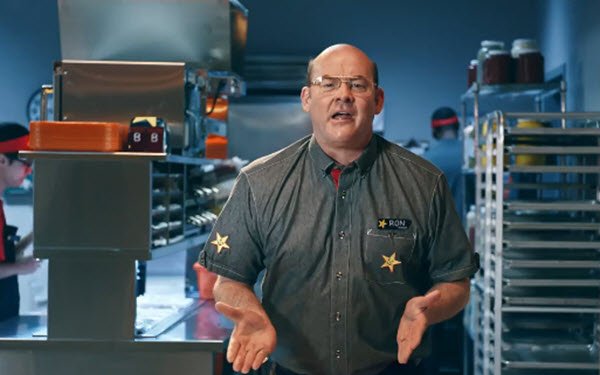 After sharing its marketing for 20 years with sibling CKE Restaurants brand Carl’s Jr., Hardee’s is trying to get its footing as a solo brand.

Hardee’s launched its first separate brand campaign — “Welcome Home to Hardee’s” — in April with Havas, which had recently been named agency of record for both Carl’s Jr. and Hardee’s.

Now, Hardee’s is debuting a second brand campaign, created with Havas-owned Arnold, which Hardee’s is describing as its newly named AOR. (Asked about the change, a Havas spokesperson told Screen Chow early this month: “We use different parts of our network constantly, depending on the needs of the client or project.”)

Both of Hardee’s’ branding campaigns (and Carl’s Jr.’s own new work) emphasize quality of food, as opposed to their old approach of luring young guys with scantily clad women.

Hardee’s first campaign emphasized its “down-home-done-right” approach to food and “comfort culture.” The main video, “Tastes Like America,” featured a brand anthem by “hick-hop” music star Big Wet, played over a montage of “real people in Hardee’s’ markets,” in the brand’s words. (The comments on that video on YouTube are decidedly mixed, with several suggesting that they initially assumed it was a joke, or an “elaborate satire.”)

The new campaign, “Cause It Tastes Better,” has celebrities playing general managers at Hardee’s, and conveying the message that Hardee’s “does real food, made right, served proud.”

In one of the first ads, David Koechner -- of “The Office” and the “Anchorman” movies (shown above) -- stresses that Hardee’s knocks itself out to make chicken tenders “the right way.”

The ads will run through December across national and local broadcast TV, social, online and out-of-home.

In a simultaneous effort, Hardee’s is running a promotional partnership with Tinder.

“Chris P.” -- a guy with a chicken tender for a head, described as Hardee’s’ “resident bachelor” -- will be on Tinder starting Nov. 28.

Singles who match with Chris P. will get a “buy one, get one free” offer on Hardee’s five-piece Chicken tender small combo, redeemable through Dec. 9.