Burger King Looks To 'Detour' Folks On Way To McD's 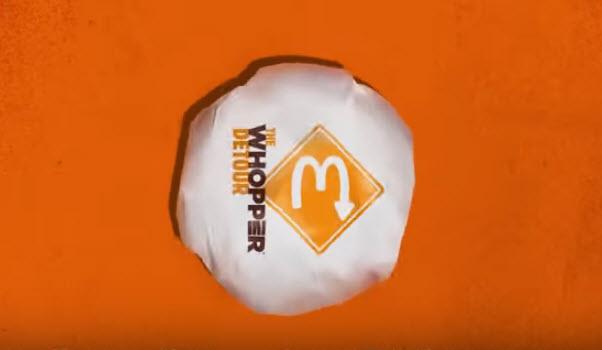 The latest volley in Burger King’s recent barrage of conspicuously naughty promotions and ads employs geotargeting to snatch business away from its perennial nemesis, McDonald’s.

From Dec. 4-12, BK is offering a one-cent Whopper to anyone who has downloaded its revamped app, and gets within 600 feet of a McDonald's.

The “Whopper Detour” works by geofencing most of the 14,000 McD’s around the country. Consumers who enter one of the geofenced areas and have the BK app will receive the Whopper-for-a-penny offer. If they accept and place the order, the app will navigate them to the nearest BK location to pick up their Whoppers.

The deal can be redeemed just once per registered app user, at participating U.S. BK locations.

The creative team is driving awareness of the promotion in part through a video (below) that captured confused McDonald’s employees interacting with consumers asking for the one-cent Whopper deal.

Other recent hijinks by the brand have included a campaign that promoted its delivery deal with DoorDash by featuring real (non-fatal) car accidents at BK drive-throughs; and a series of TV spots (timed for New York Advertising Week) that employed hilariously garbled messages to satirize the creative limits of artificial intelligence.