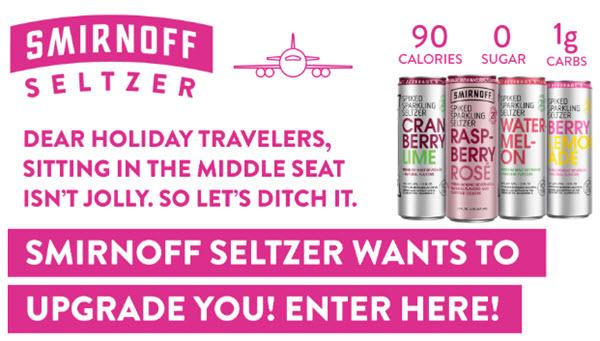 In another demonstration of that old maxim that great alcoholic beverage brands think alike, Smirnoff Spiked Sparkling Seltzer and Stella Artois are both running contests premised on making holiday travel more bearable for the lucky winners.

They’re even citing remarkably similar survey findings as rationales for their campaigns.

For its #FunofaKind promotion, Smirnoff Seltzer will spend up to $50,000 to pay for seat upgrades for fliers who would otherwise be condemned to traveling in middle seats.

To enter, now through Dec. 14, adult travelers with a middle seat ticket on a U.S. direct, non-stop flight taking place between Dec. 17 and Jan. 31, can share their pitches for why they deserve a seat upgrade, and their flight info, on the contest’s secure site (SmirnoffSeltzerUpgrade.com).

Stella Artois’ contest offers a broader range of prizes, including money to pay for a seat upgrade, a membership pass that lets the holder skip the airport security line, and free car service (plus some non-travel-related prizes, like tickets to shows and games).

Each contest is using judges to select the winners.

Taking the coincidence level up a notch, in promoting their contests, each brand cited findings from apparently separate surveys that each found more than half of American adults would rather endure things like going to the dentist (or going on a blind date, talking politics with family, etc.) than sit in a middle seat during a full flight.

Smirnoff Seltzer’s contest shares an underlying objective with a July 4 Smirnoff Ice sweepstakes that awarded winners a five-day weekend because the holiday this year fell on a Wednesday, says Smirnoff: “Bringing fun to the un-fun.”

Similarly, Stella Artois’ contest builds on the brand’s holiday marketing campaign, with TV spots conveying the message that “the best present is being present.”

A video (below) for the ale’s travel contest posits that people who are willing to brave the middle seat to see their families for the holidays deserve to have their travels made easier.