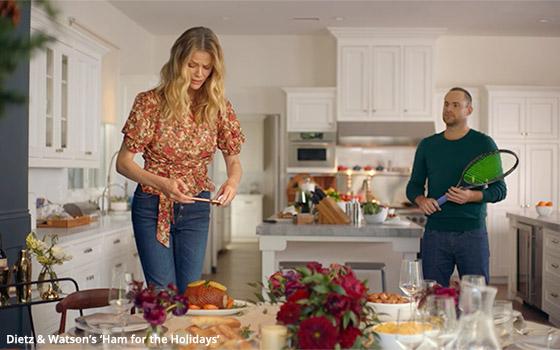 Agencies continue to unleash their festive creativity on behalf of clients this holiday season.

Dietz & Watson's “Ham for the Holidays” and "Say Cheese" spots, developed with Red Tettemer O’Connell + Partners, center on spokespeople and real-life couple Brooklyn Decker and Andy Roddick to encourage consumption of the brand's meat and cheese products. The creative shows the actress/model accidentally knocking food off the plate as her husband catches the snacks with his tennis racket, a nod to his former career.

The campaign consists of four 15-second spots via social and digital, along with one 30-second TV ad running through December. A supplementary Ham-O-Gram social initiative is distributing free holiday ham to three selected social followers each Friday.

Tim Hortons True Stories holiday campaign, created by agency Gut, features tales received via the Tim Hortons website. The "Little Man with a Big Heart" introduces a 5-year-old who uses his gift money to pay for the order of the person behind his family in the drive-thru lane. All featured storytellers are shown at the end of their respective ads.

The video series first launched online Nov. 29 and began airing on television this week. Viewers are encouraged to share their own story online using #TimsTrueStory or at TimsTrueStories.com.

Ohio is celebrating the season by reminding last-minute shoppers it's never too late to recognize the holidays with the gift of a lottery ticket. The campaign plays directly to historical sales data that people often purchase lottery tickets at the last minute.

The “It’s Never Too Late” creative, developed with Marcus Thomas, consists of three :30s, and :15 variations. All tout the broad holiday last-minute message, except each is a representation of the time of season, whether “It’s Only November,” “The Heart of the Holiday Season” or “The Time is Nigh."

Across the pond, Coca-Cola European Partners and Uber Eats are partnering with Paris-based Romance to recognize those who work on Christmas Eve.

The “When Christmas Feels Like Home” includes a digital spot that features a night watchman preparing for his Christmas Eve shift and runs across social networks.

An in-app promotion offered in 46 French towns is inviting families to pre-register from Dec. 7-15 for a free Uber Eats service and a chance to win a meal delivered on Christmas Eve with a personalized bottle of Coca-Cola.