Fraudulent Traffic Rising, So Is Ads.txt 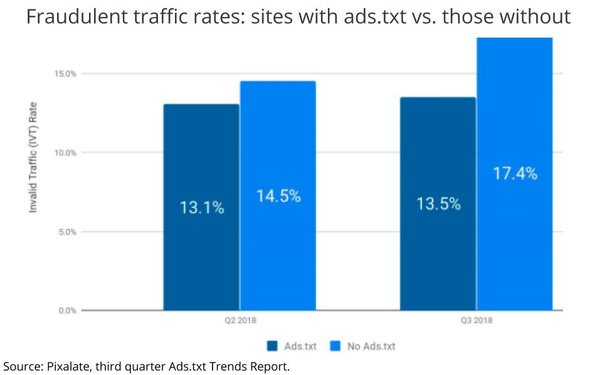 That appears to be the case, according to Pixalate’s third-quarter Ads.txt Trends Report, which shows the share of invalid traffic expanded both for sites using ads.txt and those that do not, albeit at a higher rate for those that don’t.

The report does not explain whether there is a seasonal aspect to the increase, or whether it’s a function that many more sites are now using ads.txt -- but the share of invalid traffic on sites that have adopted it grew to 13.5% in the third quarter from 13.1% in the second quarter. That’s a 3% increase in the share of fraudulent traffic found on sites using ads.txt.

The good news is that many more sites are using it, and it is doing a good overall job of reducing fraudulent traffic.

More than 77% of the top 5,000 sites now utilize ads.txt, and overall, they are delivering invalid traffic rates that are 22% lower than sites that have not.