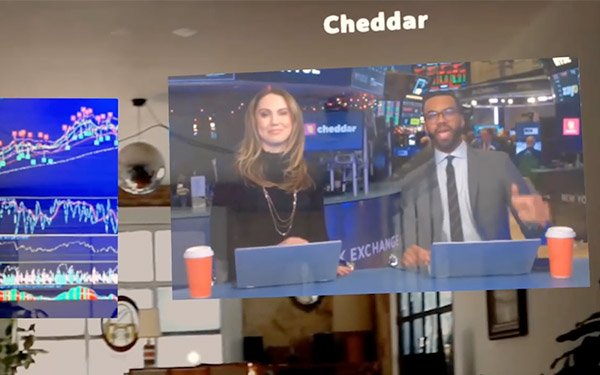 Augmented reality is being added to live news.

The business news network Cheddar has teamed with Magic Leap so live news can be seen essentially in space through the Magic Leap One Creator Edition mixed reality headset.

This is hardly a mass market concept at the moment, since the headset is priced at a whopping $2,300, although the Cheddar business and headline news app for the headset are free for download in the app store Magic Leap World.

Despite the limited availability, the mixed reality news feed does provide a view to a potential future of video viewing.

While wearing the headset, live video news screens can be placed anywhere in a room and the viewer even pin a hovering live Cheddar news screen while doing other things or viewing additional activities in the Magic Leap virtual environment, as portrayed in a short video from Magic Leap.

Magic Leap started shipping its headset in October with the device aimed at designers and developers of apps, games or art for mixed reality.

AT&T made a strategic investment in Magic Leap in July and became the exclusive wireless distributor of Magic Leap products in the United States.