Honda, Goodyear, Mitsubishi Get In The (College Bowl Series) Game 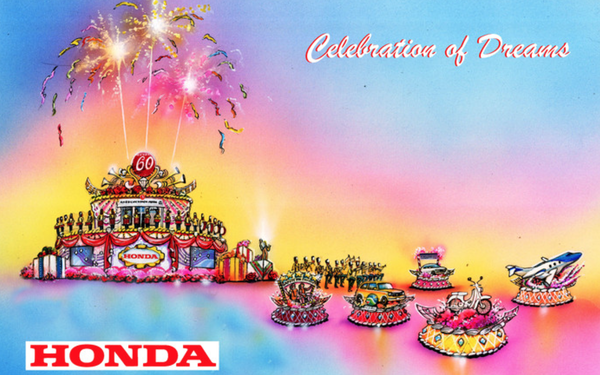 Several auto brands are using the college bowl games in their marketing efforts this holiday season.

In honor of American Honda’s 60th birthday in 2019 and the company’s long-time involvement with the iconic Rose Parade, Honda has created a Snapchat World Lens.

Honda serves as presenting sponsor of the 130th Rose Parade, which will be broadcast at 8 a.m. PT on Jan. 1.

The Honda Snapchat World Lens includes a 3-D augmented reality replica of Honda’s float and various interactive cues to trigger the sounds of the parade. Honda’s Rose Parade float will be the first-ever fully replicated parade float in AR through Snapchat, according to the automaker.

Meanwhile, Goodyear announced that it is renewing its title sponsorship with the Cotton Bowl Classic. The Classic hosted the College Football Playoff Semifinal games this year, followed by semifinals in 2021 and 2024. As part of the agreement, Goodyear will also continue its collaboration with ESPN to provide aerial coverage.

At this year’s game at AT&T Stadium on Dec. 27, Goodyear unveiled two life-sized sculptures of the Notre Dame Leprechaun and the Clemson Tiger, the mascots of this year’s competing teams. Weighing nearly 400 pounds, these statues took more than 500 hours to complete, and are, fittingly, made of 375 Goodyear tires.

Mitsubishi Motors North America was the title sponsor of college football's Las Vegas Bowl on Dec. 15, the first time the automaker has been a title sponsor for a bowl game. The deal runs two years.

Users can also access the Honda Rose Parade Lens by scanning a Snapcode, which Honda will push out across social channels. Within the camera, users point their phone at the Snapcode, then press and hold. Upon doing so, they unlock the Lens experience where they can once again interact, record or share their experience. Lens can be accessed via a Snapcode for the next three months.

Lenses are a new take on brand activation, and one of the most engaging ad products offered by Snapchat, according to the automaker. Lenses offer not just an impression, but “play time” — the time Snapchatters spend playing with the interactive experience they have created.  On average, one in three Snapchatters play with Lenses every day.

World lenses can be accessed when users are accessing the lens on the outside facing world instead of in "selfie" mode.

In real life, the American Honda "Celebration of Dreams" float entry will lead the 130th Rose Parade. The 2019 Honda Insight and 2019 Acura RDX to serve as official Pace and Sound Vehicles.

The 25-foot float will be shaped like a giant birthday cake complete with special “candles,” 60 members of Historically Black College and University (HBCU) marching bands. It will also feature a recreation of the company's first Los Angeles storefront. The main float will be surrounded by five satellite units, each dedicated to Honda products, themes and milestones.