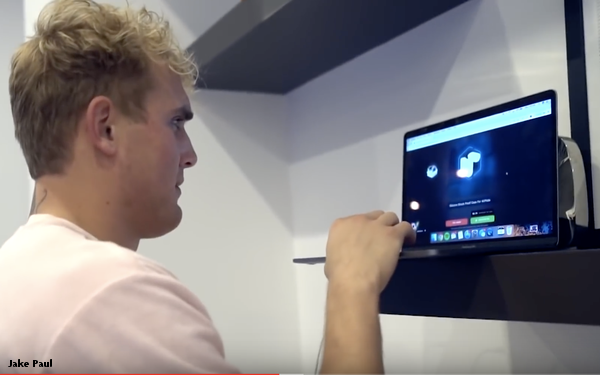 A wave of sketchy branded content videos hit some of the most popular channels on YouTube in recent weeks, promoting a service that is either a gambling site targeted to kids and teens, or a form of still-legal online gaming called “Loot boxes.”

The Mystery Brand website lets users pay to open virtual “mystery boxes” with prizes ranging from an “icicle” to designer sneakers to a $250 million house in Los Angeles, that the company does not actually own. Users can then choose to keep what they “won” in the box and have it shipped to them, or keep playing and open more boxes.

Another YouTuber, Keemstar, who has 4.6M subscribers, says he was offered $100,000 by the company to do a promotional video — and called the shady branded videos the “First big story of 2019!”

Concern around the ads first started bubbling up on Reddit Wednesday, and The Daily Beast subsequently looked into the company further. It appears to be based in Poland, and wrote terms of service so broad as to give them carte blanche over what consumers actually “win” in the mystery boxes.

The site seems to walk a still-blurry line between online gambling—which is only legal in a handful of states, and only to adults of age—and so-called “loot boxes,” a kind of virtual game that originated in video games. Typically in video games users pay to open X number of loot boxes, and the game randomly generates prizes (often costumers, skins and other virtual goods) that the player wins.

Mystery Brand is taking the loot box concept to the real world, skipping the game part altogether. Users simply pay to open the boxes and can choose to keep the prizes, which may or may not be as advertised.

Loot boxes have become a bipartisan hot topic on the regulatory, with the Federal Trade Commission saying it is looking into the practice.

What is notable about the new wave of YouTube ads for Mystery Brand is that it combined concerns about loot boxes with concerns about branded content on what has become the biggest free video platform in the world.

Whether this campaign spurs action from YouTube or the FTC will be a major test of how seriously the government and platforms are taking the controversy.