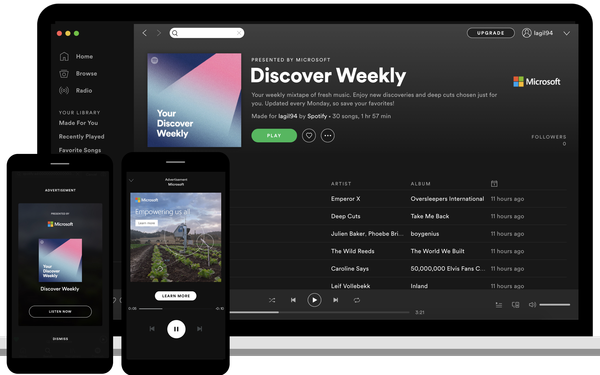 The streaming music service Spotify is opening up one of its prime pieces of real estate to sponsors.

The company says it will start selling sponsorships for its “Discovery Weekly” playlist. Discover Weekly has been a defining feature of the streaming service for years. It creates a personalized list of tracks for each user to listen to, based on their listening habits.

The playlist is refreshed once per week and is ad-supported for free Spotify users.

According to the sell sheet seen by marketers, sponsoring playlists gives the advertiser “premium brand placement within the playlist” with audio or video messages in every ad break.

“We also help build a collaborative marketing plan of Native Media to drive listenership and exposure of your Sponsored Playlist,” Spotify notes in the sell sheet.

Spotify has sold other playlists to advertisers before, but has kept Discover Weekly off-limits until now.

Microsoft will be the first company to sponsor Discover Weekly, with a campaign about artificial intelligence.

The move is part of Spotify’s long-term goal of building out its advertising business. While the company is the largest paid streaming music company on the market (with Apple Music a fairly distant second), it is seeking to balance out its business with a more robust free and ad-supported revenue stream.