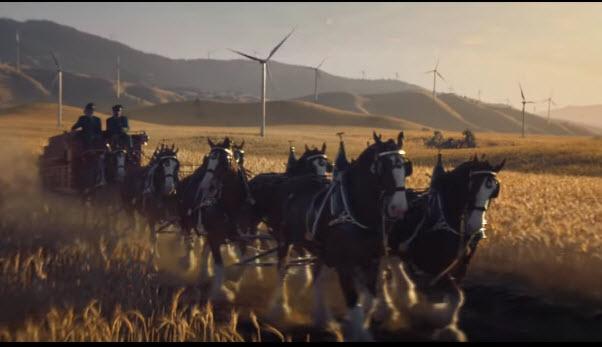 The Budweiser Clydesdales, absent from the brand’s main Super Bowl ad last year, are back for Super Bowl LIII — along with a photogenic dog, a sustainability message, and one of Bob Dylan’s most famous songs.

The just-released 60-second version of the ad for digital (the actual game ad is 45 seconds) shows a dog atop a Budweiser wagon drawn by the mascot horses, driving by a windfarm, with Dylan’s “Blowin’ in the Wind” as a soundtrack.

The ad, from David Miami, is a dramatic way to underscore Budweiser’s commitment, announced last year, to move to using 100% renewable electricity generated by wind power for brewing the beer.

The brand also announced that it will donate enough clean electricity to fully power the city of Atlanta during the week that it hosts the Super Bowl for the first time since 2000. In addition, through Feb. 7, Bud and Drift, a clean electricity supplier, are offering a free one-month trial to households that sign up to switch to Drift.

Budweiser's Copper Lager will also have a Super Bowl ad this year. That 30-second ad hasn't yet been teased or released.

Anheuser-Busch InBev also hasn't announced as yet in which quarters the Bud ads will air.