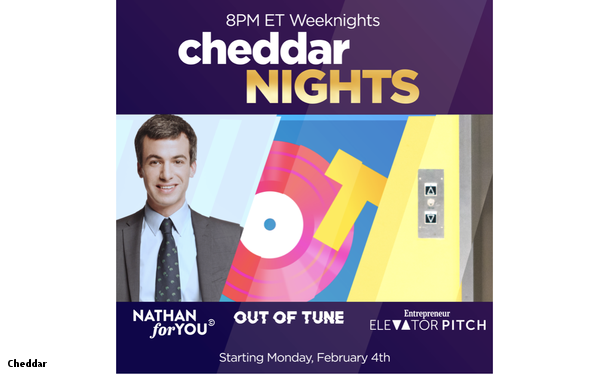 The streaming news network Cheddar is launching an evening block of entertainment-focused programming Feb. 4, featuring a slate of acquired shows.

The company will launch the block with three shows, and Cheddar founder-CEO Jon Steinberg says the company is actively looking for more to bring to the programming block. Steinberg adds he hopes to create an original Cheddar game show to launch in the next year.

“Cheddar Nights,” as the programming block is called, will be anchored by episodes of “Nathan For You,” the business-comedy show that ran for four seasons on Comedy Central. Cheddar has acquired the off-network rights from all four seasons.

Cheddar will also air the mobile game show Out of Tune, live as it airs. Out of Tune is similar to HQ Trivia, a mobile app on smartphones that lets viewers play along to win cash and prizes. DJs play songs out of tune, and players try to guess what song is being played. Because it is live, players will be able to play along on their phones as they watch on TV.

Finally Cheddar acquired episodes of Entrepreneur Magazine’s “Elevator Pitch,” which sees business owners pitch their ideas to real investors, with only 60 seconds to do so.

Out of Tune will air on Cheddar at 8 p.m., with “Nathan For You” running at 8:30, and “Elevator Pitch” to follow. Cheddar Nights will run on the Cheddar Business channel, which is available on Sling TV, YouTube TV, Hulu With Live TV, DirecTV Now, Fubo TV,  Playstation Vue, Philo, Comcast’s X1 platform, and elsewhere.

Cheddar will be monetizing Cheddar Nights via dynamic ad insertion, which it currently uses on Roku Channel, Sling TV, Samsung smart TVs and Pluto. The shows will have traditional commercial pods.

"If you are watching Cheddar on a platform with [dynamic ad insertion], you see ads in the breaks,” Steinberg says. “If DAI is not on on the platform, you are viewing you see our gadget videos and a slate saying we will be right back.”

Cheddar’s gadget videos are short-form videos that run on platforms such as Facebook.

Cheddar Nights is a significant programming expansion for Cheddar, which until now has programmed its business and news channels with anchor-led programming, taped pieces and interviews. It also makes Cheddar more of a direct competitor to linear entertainment channels that are also available in these streaming bundles.