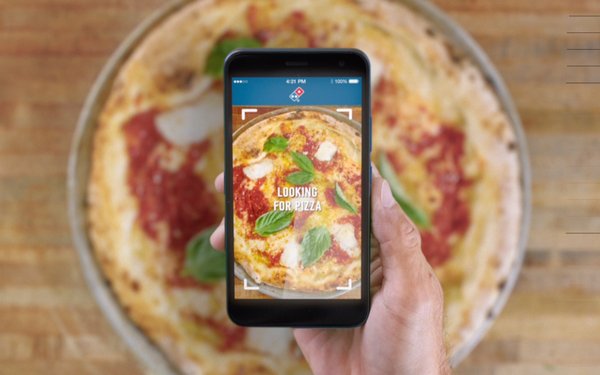 Domino's is airing its first TV commercial shot at a restaurant other than its own brand to encourage people to eat more pizza. The featured restaurant is a pizza joint in Atlanta where the Super Bowl will be played this weekend. The ad features Domino's CEO Ritch Allison.

The campaign, developed with Crispin Porter Bogusky, is linked to a new rewards component that incorporates artificial intelligence to issue points toward free pies by users who scan images of the pizza they eat with the brand’s app.

“This is the first time Domino’s is using AI technology like this,” said Dennis Maloney, chief digital officer, Domino's. “It will be running the pizza identification process and is already smart enough to identify all pizza, even if it is a homemade English muffin pizza, a pizza with a hotdog stuffed crust, or a high-end artisan pizza. It can even identify if it’s a dog’s squeaky pizza toy.”

Domino’s CEO Allison will appear in his first TV commercial for the company to support this campaign. It debuts Saturday (Feb. 2),  the day before the Big Game, to coincide with one of the biggest pizza-selling weekends of the year.

“We chose a place that was special to our CEO when he lived in Atlanta: Antico Pizza, an acclaimed family-owned favorite that puts just as much love into their pizza as we do," said Kate Trumbull, vice president of advertising, Domino's.

The Points for Pie rewards program invites members to use the newly embedded pizza identification feature to scan their pizza on the Domino's app to earn points. Earning 60  points means a free medium two-topping Domino's pizza.

The company is trying to protect itself against scammers by capping points awarded per week at 10. Domino’s has committed to giving pizza lovers at least 100 million points toward free pies during the program’s 12-week duration through April 28.