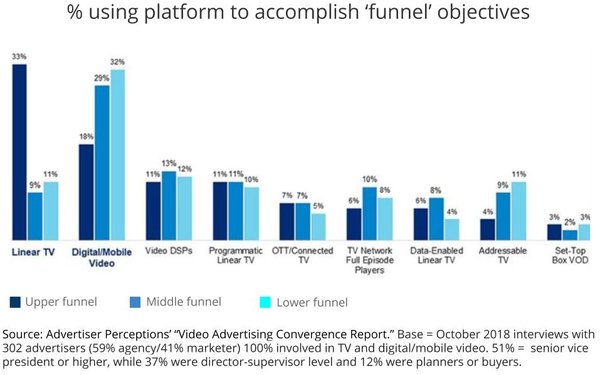 Television, with the exception of direct-response ads and home shopping networks, has long been perceived as being at the top of the so-called “marketing funnel,” but is increasingly being valued for the lower end, thanks to increases in digital backchannels and data.

That’s one of the significant findings from a new report from ad industry B-to-B researcher Advertiser Perceptions.

The just-released edition of its 2019 Video Convergence Report finds that marketers and agency executives increasingly are utilizing advanced TV platforms for lower-funnel functions such as sales, conversions, leads and other actions.

The same is true for addressable TV, although it’s still a relatively small part of the overall TV/video convergence mix.

Regardless of the strategy, the report also indicates that there is continuing broad-based demand from marketers and agency executives for utilizing TV and video advertising.

“The video expansion is not an either-or proposition,” Andy Sippel, executive vice president at Advertiser Perceptions, explains, adding: “Advertisers are expanding their investment to follow engaged viewers onto as many platforms as possible.”

While the study shows overall stability in video budgets, the share being allocated to linear TV is projected to decline two percentage points to 21% with the main beneficiaries being OTT/connected TV advertising and addressable TV advertising, which will each pick up a point over the next 12 months. 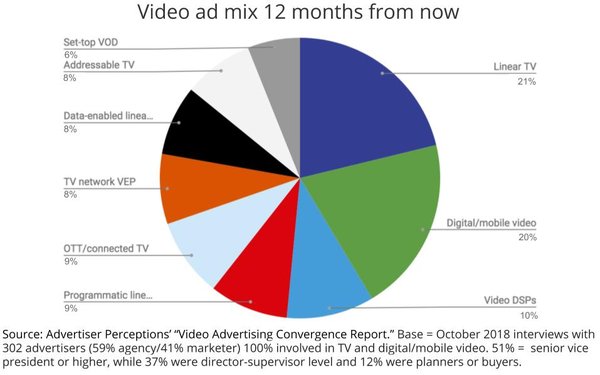 advertising, digital, marketing funnel, online video, tv, video
1 comment about "A Funnel Thing Happened On The Way To A Converged Video Marketplace".
Check to receive email when comments are posted.
Next story loading